In Malaysian, Tunas Samudera means the “child of oceans”. Her masts are 34.6 m, and the foremast includes 3 spars, of which one is moveable. The total sail surface area is almost 750 square metres. Instead of a traditional bowsprit, it has a kind of horizontal platform with railing. Thus, there is no need to provide a bowsprit net, and members of the crew can safely reach the nok. Another modern solution used on the Malaysian brigantine includes headsail furlers which facilitate sail trimming.

The ship visited Poland only once. In 2007, she called at Szczecin to attend the final of The Tall Ships Races. Although it was not successful during the races (13th in class A), organisers decided to honour the ship with a prize for the Best Newcomer and a ship that had to cover the longest distance to participate in the event. At that time, the brigantine was in her circumnavigation voyage. The 410-days voyage, during which Tunas Samudera called at 25 ports and covered 32,690 nautical miles, ended with a triumphant entry to the Port Klang, the largest port of Malaysia, on 27th April 2008. The welcoming ceremony attracted the Sultan of Selangor and the commander of the Royal Malaysian Navy. The Sultan was so enchanted with the expedition that suggested to make similar cruises at least every third year. Unfortunately, the plan has never been put to practice. Tunas Samudera has been sailing on home waters, making 20 sail training cruises each year. The training is provided not only to navy cadets but also to students of civil universities and Malaysian young people. The crew consists of 46 people. It is also worth mentioning that women also sail on board of the ship, which in a Muslim country is not a usual practice. 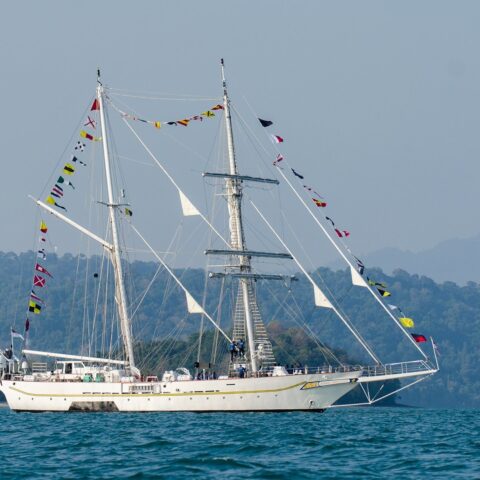