Tarangini is a three-masted sail training ship of the Indian Navy.

She was launched at the shipyard in Goa, India, on 1st December 1995. She began her service almost two years later. The design was developed by a British engineer Colin Mudie, the same who designed Lord Nelson a decade earlier. Additionally, both ships can be considered to be twins because they have identical hulls and almost the same length (54 metres).

Tarangini is the first ship under the Indian flag to circumnavigate the globe. The “Building Bridges” voyage took 15 months in the period of 2003-2004. During her voyage, the barque covered 33 thousand nautical miles, and called at 37 ports in 18 countries, including Egypt, Greece, Italy, the United States, Canada, Panama, Australia, and Indonesia. In 2005, she had her debut in the Tall Ships Races (Waterford-Cherbourg-Newcastle-Fredrikstad leg). It took a decade before the ship participated in the event again. In 2008, she set out for an expedition following the route of the old Indian dynasty. She crossed historical boundaries of the empire that had been developed by the dynasty from the third century BC. During the three-month voyage, the ship visited Jakarta, Singapore and Phuket.

Tarangini proved to be so successful that the Indian government decided to build another sailing vessel of the same design. The twin barque was launched at the Goa shipyard in 2011. She was named Sudarshini, the younger stepsister of Buddha. Although in service since 2012, the ship has never had the opportunity to visit Europe. The homeport of both ships is the city of Cochin. 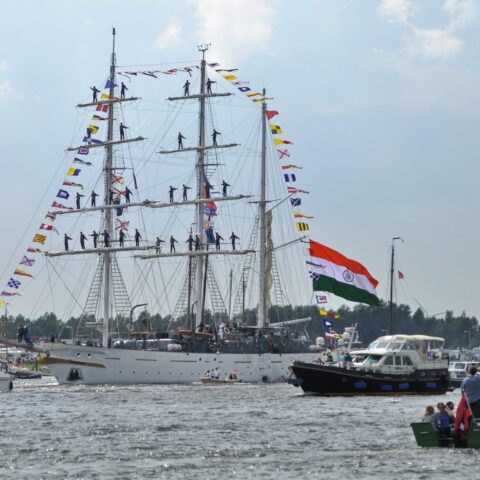