Nearly two hundred years later, at the end of the 20th c., a group of enthusiasts headed by Vladimir Martus decided to rebuild the ship. They faced numerous obstacles on the way. Since no blueprints survived, plans had to be restored based on sketches and other materials. The keel was laid on 4th November 1994. In parallel to the construction of the hull, they built a new shipyard with workshops, including carpentry and blacksmith facilities. Everything was made to old standards. Time was not an issue for Vladimir, as he focused more on using specific techniques and relevant materials. Finding the right timer was a challenge. The shipbuilding took 250 trees which they found and cut manually in the vicinity of St. Petersburg. Frames and keel were made of oak, hull plating was made of larch, masts and spars of pine, and ornaments of linden.
Over time, the project became popular and more people wanted to join in. The romantic idea was a magnet attracting many volunteers. First sponsors appeared as well. Swedish Volvo declared to provide engines, and Great Britain and the Netherlands wanted to help as well in recognition of the historic link between the countries and the person of Peter the Great. Some people provided materials, others provided money or encouraged their friends to do the same. Finally, the large group of supporters made the project financially viable.
On 30th May 1998, when the hull was ready, the ship was christened. The ceremony attracted the St. Petersburg’s governor accompanied by his royal highness Andrew, the Duke of York. Crowds watched the launching of Shtandart, and the event turned into a festivity for the whole city. On 4th September 1999, the crowd of 40 thousand watched the huge crane launching the ship on the River of Neva. The bold dream of a small group of passionate people came true.

In June 2000, Shtandart started her maiden voyage. She visited the Netherlands and England, venues where Tsar Peter the Great learned shipbuilding. Since that time, the tall ship has been a regular participant to The Tall Ships Races. Although it can sail fast, it rarely ranks very high. The top speed noted is 14.8 knots.
The ship is divided into historical and utility sections. The latter occupies lower decks. Hidden from visitors’ eyes, one can find modern conveniences there, which could hardly be found at 18th century ships. These include auxiliary engines, pumps, kitchen, and cabins for the permanent crew. Nevertheless, upper levels and the open deck are identical as they were during the life of the tsar. The only difference is that instead of 28 cannons, the new Shtandart has “only” 5, which prove very efficient during historical reconstructions and shows in ports. Fewer cannons mean that the ship is not overloaded but more stable.

In 2005-2009, Shtandart was a star of the St. Petersburg showpiece annual event of the “Scarlet Sails” organised at the beginning of summer. The event culminates in passage of the tall ship along the Neva River with her sails lighted red. The passage attracts thousands of spectators gathered on river banks. In 2010, Vladimir Martus’ ship could not participate in the event, as the Russian administration questioned her security certificate and disregarded her historical character. Since that time, the ship did not call at Russian ports for over 11 years to avoid detention. This changed in 2020. The ship was registered again as a sport sailing ship permitted to make training cruises.
Shtandart is a three-masted square-rig ship of length overall 34.5 metre. Her mainmast is 33 m in height and the total sail area is 620 square metres.
The most attractive décor is the figurehead of a crowned lion, a symbol of power and strength, accompanied by sirens. On both sides of the ship, locations of gun ports have been well marked and decorated with curved wreaths. At the stern, above captain lounge windows, a two-headed black eagle has been placed, an emblem of the Russian Empire. Sails are identical in shape as they were two hundred years ago, but these are made of modern, synthetic materials. Moreover, spars are placed at the bowsprit, a solution no longer used in contemporary sailing ships. A rectangular sail at the bow is called a blind-sail. Although it adds some speed, it blurs the view for sailors on the watch. 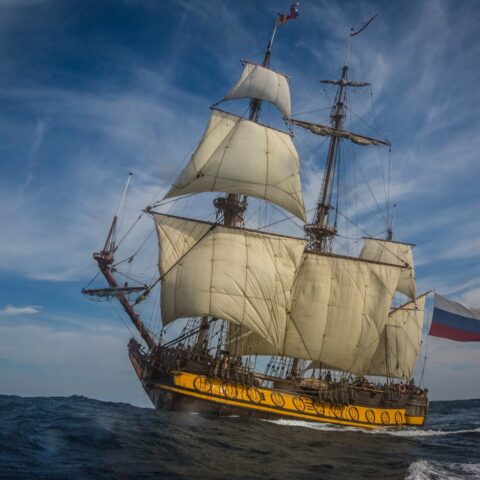 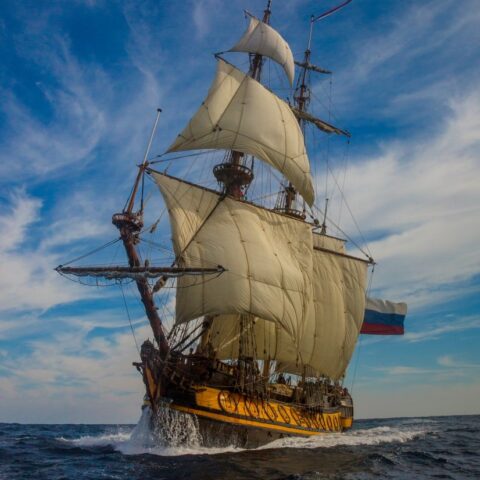 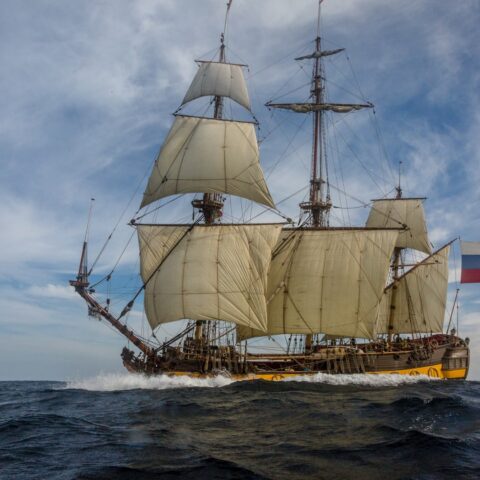 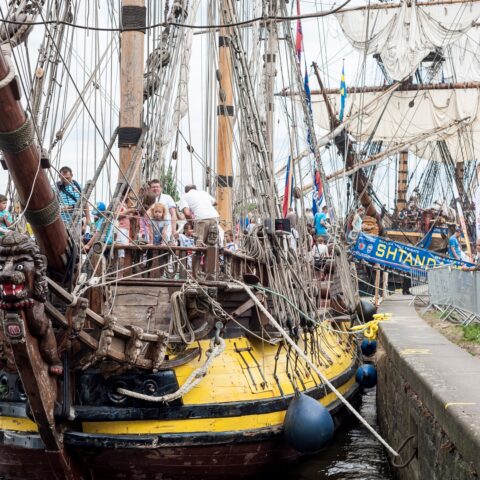 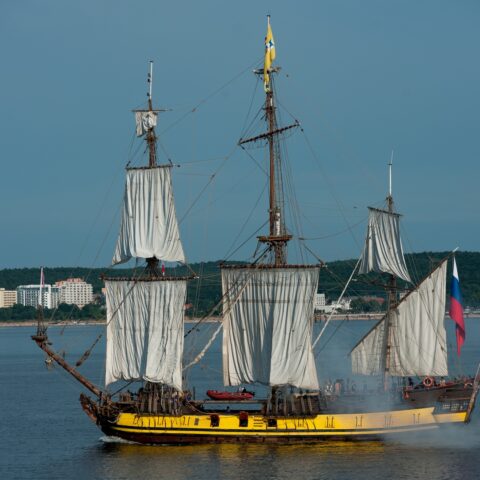