Although Oman, whose coastline is nearly 3000 kilometres long, is proud of their naval tradition, their navy was officially founded in 1970. The rapidly growing fleet needed qualified staff. For the Omani cadets to learn practicalities of sailing, in 1977, the country bought a 52-metre wooden fully-rigged schooner Captain Scott in Great Britain. She was built merely 6 years earlier in the Scottish town of Buckie. The three-masted sailing ship made cruises with 16-21 y.o. boys on board under the sail training programme. A typical cruise took 26 days. Apart from ship operation and navigation, young sailors visited sites at the Scottish coast and during their stays in ports made hiking trips to the mountains. After the change of flag, the ship was renamed and the colour of the hull changed as well from black to white. The Royal Oman Navy ship was named Shabab Oman, which means “The Youth of Oman”.
Initially, officers on board were British and German. One of the first captains (1978-79) was Immo von Schnurbein, previously the commander of Gorch Fock. Gradually, Omani officers took over the lead and started implementing their own ideas, including the change of the rig. In 1984, they resigned from the gaff sail at the mainmast and the ship was converted to a barquentine.
During busy years of service, Shabab Oman participated in the most important sailing events all over the world. She visited the United States on the 100th anniversary of the Statue of Liberty (Tall Ships Races 1986), Australia on the 200th anniversary of the European colonisation (1988), and Grand Regatta Columbus ‘92 on 500th anniversary of Christopher Columbus expedition at Sail Osaka 97. She regularly participated in The Tall Ships Races, and became a notorious winner of the STI Friendship Trophy. This precious prize is awarded to a crew who makes a major contribution to international friendship and understanding. In other words, it goes to a crew who contributes to good atmosphere during the race and stay in ports. Captains of participating ships, in a secret ballot, awarded Shabab Oman with the trophy 6 times: in 1996, 2001, 2005, 2008, 2010, and 2013. No other tall ship can boast of such an achievement! How do Omani young people do this? The answer is smile, lively atmosphere, and music. During events they attend, Shabab Oman has introduced a traditional spontaneous concerts given by a band dressed in white uniforms which plays drums and bagpipes. During their performances, a quay next to the ship turns into a large dance floor. Citizens, tourists, and other sailors dance all night long to typical Arab rhythms.
After nearly four decades, the beloved ageing barquentine was to be replaced with a new tall ship. The shipbuilding contract was secured by Damen, the Netherlands. The Omani client did not want to experiment and decided to go for a proven design by a renowned naval architecture studio Dykstra. Thousands of nautical miles safely sailed by Stad Amsterdam and Cisne Branco provided the best guarantee of their quality. The full-rigger designed for Oman is slightly larger than her elder sisters. Her length overall is 87 metres (9 metres more). The hull has an outstanding V shape (when seen from the bow side) which is a reference to world famous tea clippers.
The ship was born in two locations. Her steel hull was launched in the Galati-based Romanian branch of Damen on 2nd December 2013. Then the hull was towed to Vlissingen to be fully furnished. The colours ceremony was held on 12th September 2014. Sea trials, monitored by the captain and the crew of her twin vessel Stad Amsterdam, showed that thanks to improvements Shabab Oman II could sail closer to the wind. The new ship was named like her wooden sister which was withdrawn from service. The wooden predecessor has been moored at the navy base in Muscat.
The total area of 29 sails is 2630 square metres. Some of her square sails display a red Arab stiletto jambiya and two crossed sables, the national emblem of the Oman Sultanate. In November 2016, a figurehead was added, i.e. a wooden sculpture of 15th century navigator Ahmad ibn Majid, who, according to some historians, helped Vasco da Gama to find the passage to India. The ship takes 56 fixed crew and 36 cadets, including women.
The second Shabab Oman is different from her predecessor in respect of several parameters. She is nearly twice the size, faster, steel, and more modern. One thing has not changed. The crew is equally popular in ports and they keep winning awards. The captains lounge displays two STI Friendship Trophies, one received in 2017 (TSR final in Szczecin) and one in 2019.
The Oman ruler Kabun ibn Said, who contributed to the rapid development of the country and its navy, loves tall ships so much that in 2012 he established a grant scheme. The grant supports young people from all over the world who can now sail on board of ships participating in races and regattas organised by Sail Training International. Hopefully, the successor of the late ruler will be equally supportive regarding tall ships and sail training.
Shabab Oman II (Oman) 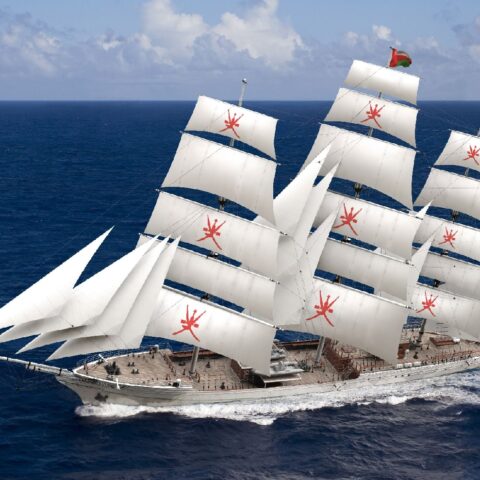 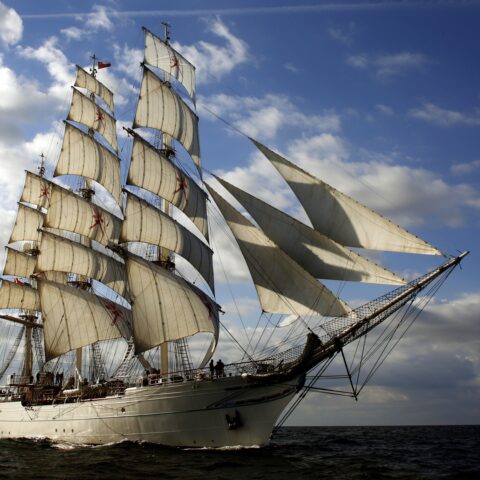