In 1937, the four-masted schooner was built in Lisbon in a record short period of just 62 days.

The government planned to use steel from hulls of Santa Maria Manuela and her sister vessel Creoula to build two navy ships. Although the order was abandoned, the top quality material was not wasted. Instead of cannons, masts were fitted to the ships and their grey camouflage paint was replaced with white one.

For many years, she was abated to the famous Portuguese White Fleet, whose vessels were involved in cod fishing near Newfoundland. These vessels had characteristic hulls with high bows, wide afts, and a slightly lowered sides in the midship section to make loading of fish easier. Back then, the crew of 72 people included 54 fishermen, who embarked smaller flat-bottom boats once they reached their catching grounds. Work was tedious and risky. Some fishermen who sailed to far away from the main ship were lost, never to be found again. Several of those historical boats are still kept on board of Santa Maria Manuela for visitors to better understand the fishing period of her history. In some ports, the crew uses these boats to organize races.

Santa Maria Manuela usually sailed on engine with her sails set. This enabled the ship to reach the speed of up to 13 knots. Thus, voyages from the North Atlantic to Portugal never took longer than 10 days. This guaranteed that fish caught were delivered fresh.

At the end of the 1960s, at fishing grounds, sailing ships started to be replaced by motorised ships. Santa Maria Manuela was refitted too. After having her masts and a superstructure in the aft section removed, she was not very different from a typical merchant ship. In the early 1990s, after several “Cod Wars” and overfishing, fishing at the coast of Newfoundland discontinued. The redundant ship was moored in the port of Aveiro, where she slowly deteriorated. Finally, in 2007, she was bought by Pascoal & Filhos. Her new owner Anibal Paiao was very affectionate about the Portuguese White Fleet, for his grandfather, father and uncle served as captains on board of those vessels.

Careful renovation took three years. The ship’s overhaul followed original plans of 1937. Since May 2010, she has been back in service as a sailing ship. She has already made a sentimental cruise to Newfoundland. She has also been a frequent participant in The Tall Ships Races. In November 2016, Santa Maria Manuela was acquired by Recheio Cash and Carry, one of companies in the Jeronimo Martins Group (owner of Polish Biedronka retail chain). 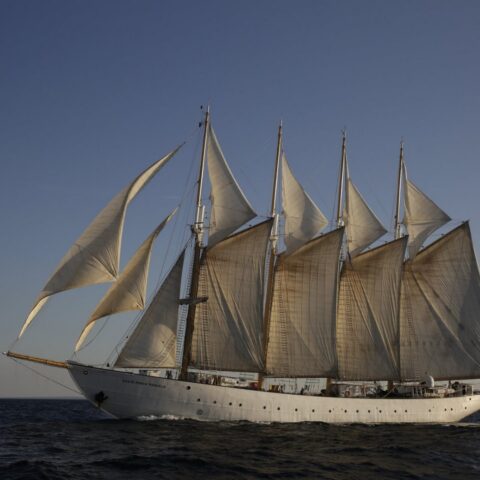