The first Sagres was a wooden corvette built in Limehouse, Great Britain, in 1858. The second one started her service in the Portuguese Navy in 1924. At that time, she was already 28 years into the service as a commercial vessel under the flags of Germany, England, and Portugal. In the early 1960s, it was evident that the ageing ship urgently needed to be replaced. The new ship was found on the southern hemisphere. In 1961, Brazilians sold their barque Guanabara to the Portuguese, as she had been withdrawn from the service two years earlier. The Coffee country, at that time flirting with modernist ideals, was convinced that sail training was relic of the past. Brazilian officers were happy to sell the unused tall ship for 150 thousand US dollars just to see her going to her new home. They could not have thought that the ship would still sail six decades later.
The ship owes her good condition to her robust construction. She was built in 1937 in the proven Blohm und Voss Shipyards in Hamburg. She was the third ship of the series that started in 1933 with Gorch Fock. The launching took place on 30th October 1937 and attracted crowds of Nazi politicians and servicemen to docks in Hamburg. The patron of the ship was Albert Leo Schlageter, a WWI veteran who was the commander of the Freikorps in the Upper Silesia in the early 1920s. He was known for his brutal attack on Polish insurgents. He was executed by the French for sabotaging the French Army in the Ruhr. For the Nazis, he was a national hero.
This murky and tragic patron did not secure luck for the tall ship. A flag with svastika topped her stern and the ship had two serious accidents. First, she collided with another ship during her maiden voyage, merely three days after leaving Hamburg. On busy waters near Dover, the barque hit the English steamship Trojan Star and had to move back to the shipyard. She inflicted her second damage on 14th November 1944 after colliding with a Russian mine near the Cape Arkona on the Baltic Sea. The explosion made a hole in the hull and only the assistance of her twin sister Horst Wessel (today’s Eagle) saved her from sinking. The explosion killed 18 crew members.
After the war, both twin sisters went to the United States as war reparation. Americans renamed Horst Wessel to Eagle and turned it to a stain training barque for their Coast Guard. In a difficult period immediately after the war, they did not have an idea how to use the second ship. For three years, Albert Leo Schlageter stayed idle in Bremerhaven to be finally sold to Brazil for a symbolic compensation of 5 thousand US dollars. After moving to Rio de Janeiro and repair in the local shipyard, the ship named Guanabara started her service on 27th October 1948. She was named after a bay in the vicinity of the Brazilian Naval Academy. During her service under the green, yellow, and blue flag she made 71 voyages and covered 65 thousand nautical miles. Interestingly, she had called at only one foreign port. In 1949, she stayed for 10 days in Montevideo, the capital of Uruguay.
She made longer and much further voyages in the Portuguese service. In 1962, during the first sail training season as Sagres, the ship called at Mindelo on Cape Verde Islands. A party was hosted on board of the ship where attendees fell in love with the beautiful voice of Cesaria Evora, who then became a popular singer all over the world. In 1964, the ship participated for the first time in the international regatta on a transatlantic route. She also participated in the Tall Ships Races in New York. In 1978-79, Sagres circumnavigated the globe for the first time. She repeated it in 1983-84 (to participate in Sail Osaka on the occasion of 400th anniversary of the Osaka castle) and in 2010, when the barque sailed passed Cape Horn twice while participating in Velas Sudamerica – a joint escapade of sail training vessels from South America around the continent. The forth circumnavigation was scheduled for 2020 to commemorate the 500th anniversary of the Magellan’s expedition. Unfortunately, the outburst of the pandemic interrupted the plan. After she crossed the Atlantic Ocean, for security reasons she was ordered to return to her home port of Lisbon.
Sagres is a three-masted barque of length overall 89 m. Her figurehead depicts a moustached Henry the Navigator. Being a patron of navigators and cartographers, the prince, who was not a sailor himself, holds scrolled maps. Initially, the ship’s figurehead was a golden eagle who kept svastika in its claws. After buying the ship, Brazilians decided to leave the sculpture, only the Third Reich symbol was removed.
At the stern of Sagres, one of three steering wheels bears the motto: A Patria Honrae Que A Patria Vos Contempla, which means “Respect your home land, as the land is looking upon you”. In 1863, Portuguese King Ludvik I adopted a decree which requested to expose the motto at a prominent place on all his ships. Today, although the decree has never been revoked, Sagres is the only Portuguese navy ship to bear the motto.
Distinguishing features of the ship include red crosses of the Military Order of Jesus Christ. The order was established in 1318 and, after the dissolution of the Knights Templar, it took over some of their assets. The order, member of which was Henry the Navigator, played an important role in the history of Portugal. They funded offshore expeditions and contributed to the imperial position of the country. Crosses on Sagres’ square sails are a reference to the tradition of Portuguese ships from the times of great geographical discoveries. 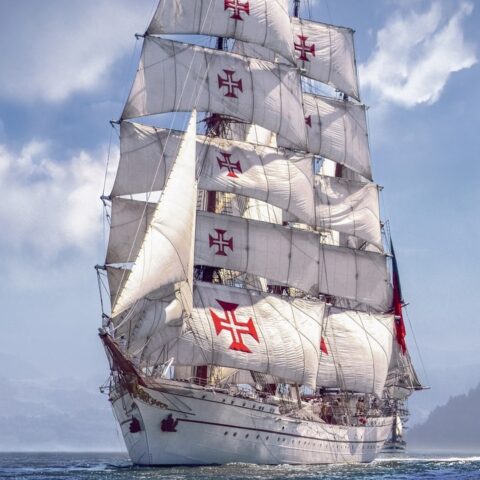 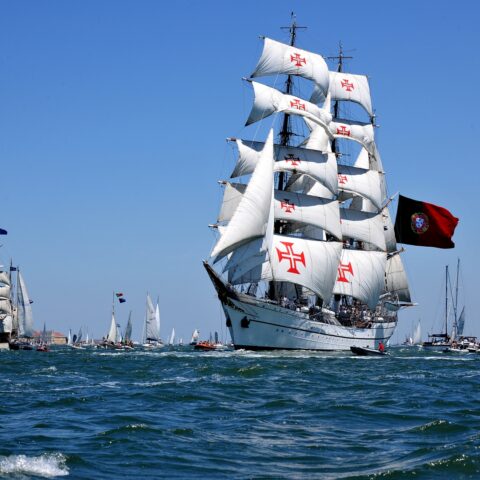