The ship was built in the new post-communist reality in the early 1990s. The hull was launched on 28th May 1991. Contrary to her elder sisters, Druzhba, Mir, Pallada, and Khersones, the red banner with sickle and hammer has never been hoisted up her flagpole. On 5th June 1992, when the ship started her service, the Soviet Union did not exist (USSR collapsed on 26th December 1991). Therefore, during the ceremony held in Gdańsk, a three colour flag of the Russian Federation was displayed at the stern and the ship set out to her maiden voyage to the home port of Vladivostok.
During the first years of her operation, a distinguishing feature of the ship was a navy blue inscription FESMA on her white sides. It was an English acronym of the operator’s name, the Far Eastern State Maritime Academy, now the Admiral Nevelsky State Maritime University.
Every year, the ship makes sail training cruises with students from the above and other Russian universities. Most often, the ship sails on the Pacific Ocean. The longest trip so far has been the circumnavigation in 2003-2004. While on the route, she crossed the Baltic Sea, to commemorate the 300th anniversary of St. Petersburg and participate in The Cutty Sark Tall Ships Race (the last one under the brand name of whisky manufacturer). A host of one of races was Gdynia, and Nadhezda moored side to side with her twin sisters Mir and Dar Młodzieży. Since that time, with Vladivostok-based three-masted ship has not had an opportunity to visit Poland. On her circumnavigation, she visited London, Santa Cruz, Rio de Janeiro, and Hong Kong. On 1st December 2003, Nadhezda joined the group of tall ships proud of passing the stormy Cape Horn. During the 14 months and 3 days of the voyage, she covered the distance of 44,618 nautical miles, called at 30 ports, and crossed the Equator 3 times. The exploration team included 11 students from Poland.
She made her second circumnavigation on her 25th anniversary in 2016-2017. The route includes crossing of the Black Sea and the participation in the SCF Black Sea Tall Ships Regatta organised by the Sail Training International. Under the command of captain Sergei Vorobiov, the crew wanted to win the same title she was awarded with two years earlier. It seemed that they could succeed again. Nadhezda had fair winds and took the lead on the route from Novorossiysk to Sochi. On the 20th September 2016, at night, the ship was struck by a particularly strong gust of wind. The ship lost the top of the mainmast and had to withdraw from the race for several hours. Finally, Mir won the race. Fortunately, no one was hurt but the ship had to resign from the circumnavigation. She moved from the Black Sea to the Baltic Sea to the specialist Sventa-based shipyard in the Kaliningrad Oblast. In April 2017, after she was repaired, the ship headed to her home port across the Mediterranean Sea, Red Sea, and Indian Ocean. While passing the Gulf of Aden, known for piracy, she was escorted by Admiral Vladimirsky, an ocean research vessel of the Russian Navy, with an anti-terrorist squad on board.
In 2010, Nadhezda sailed to Shanghai to be an attraction during the world expo. It was a tremendous success, and two years later, she was sent to a similar mission at EXPO in Yeosu, Korea. Apart from sail training, the ship is used for research. Every year, researchers get on board of the vessel to monitor the status of water and study fauna and flora. They use modern equipment installed on board. In 2011, Nadhezda examined the impact of the Fukushima accident on the environment at the Sea of Japan. Since 2014, the ship’s operator has been state-owned Rosmorport, the same company which operates Mir.
The Russian name of the full-rigger means hope. It is a reference to a historical vessel which circumnavigated the globe under the command of Ivan Kruzenshtern in 1803-1804. It was the first circumnavigation in the history of the Russian fleet. 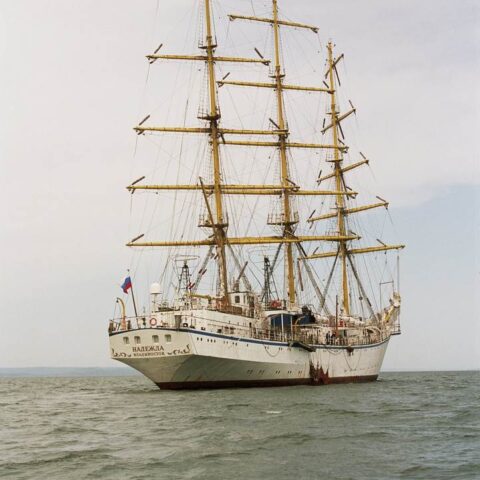 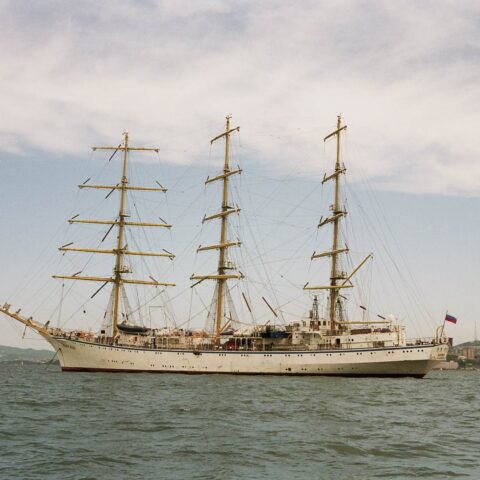