Mircea is a three-masted barque of 82 meters in length and a beam of 12 metres.

Her masts are 44 meters in height. The total area of all 23 sails is almost 1800 square metres. The ship’s operator is the Constanta-based Romanian Navy Academy of Mircea cel Batran. This city is also the homeport for the tall ship.

Partly funded by donations, the ship was built to the order of the Romanian government in 1938-39. The new ship was expected to replace an aging wooden brig of 1882 having the same name. The contract was awarded to the Hamburg-based renowned Blohm und Voss shipyard, the same which built Dar Pomorza. However, the Romanians did not want to buy a pig in a poke. They decided to order a sailboat from a proven series of barques. The series started with Gorch Fock launched in 1933. Then two more similar ships were launched in Hamburg: Horst Wessel (now Eagle, USA) and Albert Leo Schlageter (now Sagres, Portugal). These ships once made a series of sailing ships providing training for the Nazi Navy. Mircea was the fourth barque in the series. The hull was launched on 22 September 1938 and on 27 April 1939 the Romanian flag was hoisted on the sailing ship. On 17 May the same year, she came to her homeport in Constanta to be welcomed by her retired predecessor of the same name.

In 1944, the ship was captured by the Soviets who took her over together with several other ships as part of war reparations. It is worth noting that during the Second World War Romania fought on the side of the Axis Powers. Two years of covert diplomacy helped to recover Mircea.

In November 1965, the ship survived the most dramatic moment in her history. She was caught in an extreme storm while sailing across the Bay of Biscay. The towing rope broke and since the ship had no working engine, she was pushed by powerful waves toward a rocky shore. As the situation grew increasingly dangerous, the captain decided to send a distress signal. It was picked up by the Norwegian freight vessel Conrad and 2 French rescue ships. After several unsuccessful attempts to pass the rope to the drifting ship, the ship was finally brought safely to the port of Brest. The Romanian barque had more luck than 44 other ships which had sunken in the Biscay storm that day.

Mircea makes her training cruises mostly in the Black and the Mediterranean seas. The ship makes long transatlantic cruises every ten years The most famous of them took place in 1976. The ship went to America to take part in the Tall Ships Races organized to celebrate the United States Bicentennial. During the parade in New York, which the ship attended for the first time, all sister ships could meet in one place, including Gorch Fock I (ex-Soviet Tovarishch), Sagres, Eagle, Gorch Fock II (a copy of the original vessel made in 1958) and, of course, Mircea.

The end of the Millennium was a sad time for Mircea. Since autumn 1994, the ship was immobilized for more than 7 years. Romania, which suffered a serious crisis after the collapse of the Ceaușescu regime, could not afford the multi-million renovation of the ship. Better times came with the 21st century. The renovated ship returned to her service at the end of 2002.

The ship was named after the famous medieval ruler of Wallachia in 1386-1412. Mircea cel Batran is considered to be an outstanding statesman and a commander who led to a substantial expansion of state borders. During his reign, Wallachia developed its shipping industry and sea trade. A sculpture of the ruler was placed as a figurehead. The moustached head of the ruler in blue attire is one of the more characteristic contemporary figureheads. 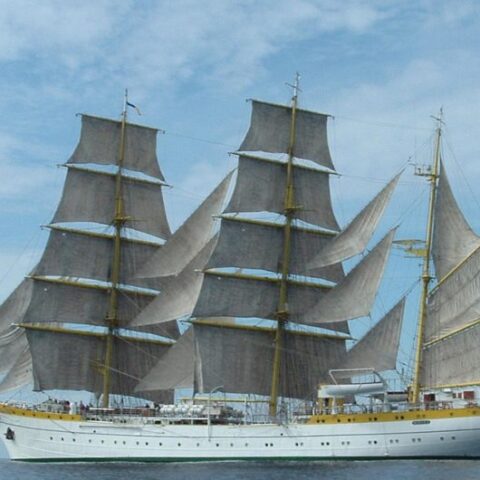