In the late 1940s, Italians searched for a sailing ship to replace Cristoforo Colombo, a twin sister of Amerigo Vespucci, which they lost during the war. Since they lost in the war, Italy had to pay reparations. The three-masted vessel named after the discoverer of America went to the Soviet Union and was renamed to Dunay. The Navy command quickly realised that one tall was too little to meet training needs. Since they suffered a serious damage during the war, they could not afford to build a new one. Thus, they decided to buy one from the secondary market. They choose to buy French barquentine Jean Marc Aline, whose owner was dissatisfied with too little profit made on fishing in the Indian Ocean and he decided to sell the ship.
The condition of the fishing tall ship was quite good. Her steel structure was made in the Nantes-based Anciens Chantiers Dubigeon Shipyard. The ship went into service under the name Commandant Louis Richard in 1934. Interestingly, the name can steel be seen at the Palinuro’s steering wheel. Initially, she had a rigging of a schooner. After the outbreak of the Second World War, she made several cruises to catch code near Newfoundland. In 1948, she had her operator, name and rigging changed. The enthusiasm of the new owner did not withstand the test of the tough reality. Already after her first unprofitable cruise, the tall ship was put up for sales again. Italians submitted the best bid and in 1950 the barquentine went to sunny Italy.
After an overhaul in the Castellammare di Stabia shipyard (the same which built Amerigo Vespucci), the ship started her service on 16th July 1955. Her patron was Palinurus, a hero of the Roman mythology and a helmsman on the Aeneas’ ship. The story was described by Vergil in his epic poem of Aeneid. The name was well known in the Italian navy. Palinurus is the sixth ship of that name. Her figurehead is a golden sculpture of a mythic person holding a helm. It is a reference to a legend of Palinurus who feel asleep and fell off a ship.
The total area of her 15 sails is nearly a thousand square metres. The tallest mast is 35 metres. Her mainmast is only a half metre lower, whereas the mizzenmast is 30 metres long. The slogan of the ship is a Latin sentence “Faventibus Ventis”, which translates into a wish of fair winds. Steel, riveted hall is painted black with a white stripe and distinctive gun ports. The wheelhouse also stands out in the silhouette, as it is placed far back on the stern.
In the early 1980s, when the time had come for the overhaul, the operator thought to withdraw the ship from the service and build a new one. Detailed calculation, however, showed that financially it did not make much sense. In 1984-86, in the docks of Messina, necessary repair was made and the Palinuro’s life has been prolonged for several decades.
Her home port is La Maddalena on Sardinia. The ship provides sail training for non-commissioned officers, mainly from the naval academy in Taranto. The ship sails most often on the Mediterranean Sea. She also went many times to the Atlantic Ocean, but also the Black Sea and Northern Sea. She has never called to Poland. In recent decades, she has not participated too often in The Tall Ships Races. 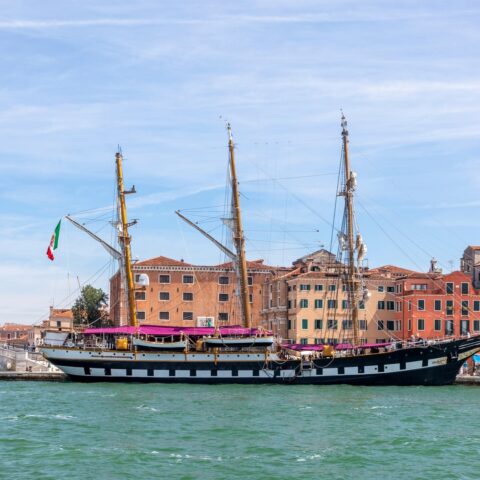 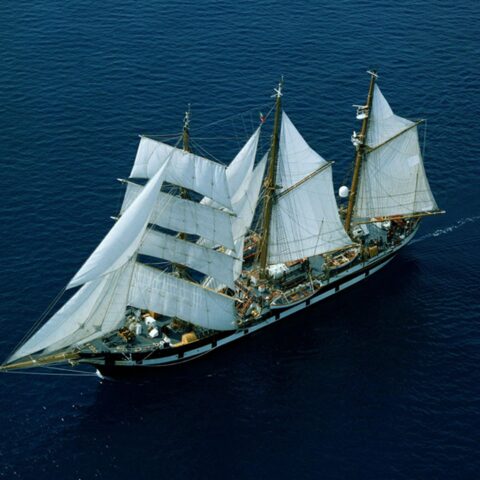