JUAN SEBASTIAN de ELCANO is proud of making the longest voyage of all tall ships in service.

In her history, the tall ship made as many as 10 voyages around the globe (11th voyage is expected to be completed in 2021). The name says it all. The patron of the ship is a Basque traveller who participated in the famous Ferdinand Magellan’s expedition. In September 1519, a fleet of five vessels set out from Seville, Spain. The goal was to discover a western route to the Spice Islands. After three years, only one ship Victoria returned back to Spain with a decimated crew of 18 sailors commanded by Juan Sebastian de Elcano. Thus, he became the first man to circumnavigate the globe. A Latin motto on the stern of “ELCANO” refers to that fact: “primus circumdedisti me”, which means „first to circumnavigate me”.

The origin of JUAN SEBASTIAN de ELCANO dates back to 1910. In that year, an ageing frigate Nautilus was decommissioned, and the Spanish Navy was deprived of a training ship. Future officers had to train on board of vessels in regular service. This education, however, was soon found inefficient. For this reason, already in 1923 a contract was made with the Echevarrieta y Larrinaga Shipyard in Cadiz to build a new sailing ship. The order for a new design was placed with a renowned British architect Charles Nicholson. Initially the tall ship was to be named Minerva. The new name of a famous explorer was suggested by the shipyard owner during keel laying. The proposal was communicated to the king and it was well received. Then, the hull was launched on 5th March 1927 and named after JUAN SEBASTIAN de ELCANO. After sea trials, the ship was put into service on 17th August 1928.

The total area of 21 sails is 2,870 m2, and the tall ship can sail with a maximum speed of 17.5 knots. The mast height is 48.5 m. Interestingly, each of her masts has a different name which refers to previous training ships of the Spanish fleet. These are Blanca, Almansa, Asturias and Nautilus. The figurehead is the goddess of Minerva. Under the deck, the captain’s lounge is particularly imposing with a series of prestige Boston Teapot Trophies on display. A unique place is the commander’s smoking lounge with commemorative plaques from visited ports displayed on walls. Since 2019, the key to Szczecin’s gates has been hanging at a prominent place.

She can take 275 people on board, of which 197 are the core crew, and 78 cadets: 4th grade students of two Spanish Navy academies. The latter also includes women. There is always a catholic priest on board and on every Sunday and holiday a service is held for the crew. Another tradition is that on every training voyage, there is a representative of British or American navy on board, who acts as an English teacher. Training on board of JUAN SEBASTIAN de ELCANO is a reason to be proud. Such training was also taken by future kings of Spain, e.g. Juan Carlos (1958) and Philip VI (1987).

Although she is not a military ship in the full sense of the term, the tall ship has weaponry. The weaponry consists of four machine guns and two cannons that are used for the gun salute. JUAN SEBASTIAN de ELCANO’s homeport is La Carraca, a naval base of the Spanish Royal Navy, situated in the city of Cadiz. 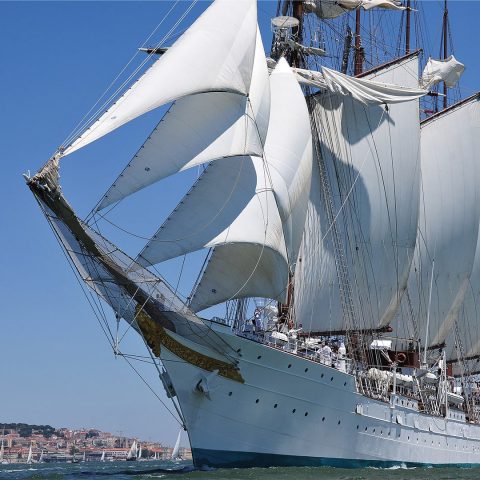 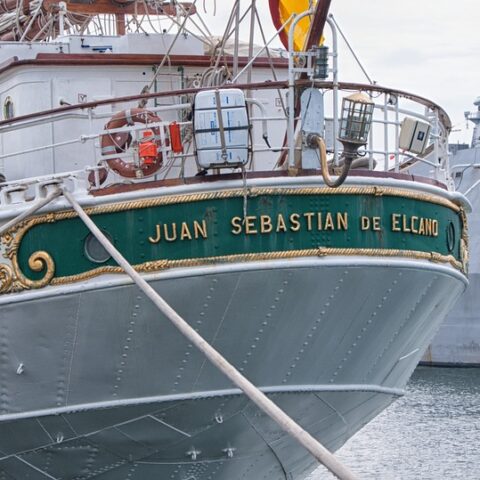