EL MELLAH is the largest tall ship ever built in Poland. She was built in the Remontowa Shipbuilding in Gdańsk. The hull was launched on 7th November 2015 and it was the thousandth launching in the history of the shipyard, previously known as Stocznia Północna (or Northern Shipyard).

Algeria is the first African state to have a training tall ship. Future officers of the navy can have their training on board of the full rigger. The crew of total 222 members includes 120 cadets, of which 40 are women. This may be a bit of a surprise considering that Algeria is a Muslim country. The tall ship has a streamlined hall and a rounded stern with three open decks, like those you can find on a luxurious cruise ship. This was actually the request of the Algerian client, since apart from training, their flag ship should also provide a representative function. And it is the stern where the most prominent visitors are received.

The name means a “sailor” or a “navigator” in Arabic. The tallest mast of EL MELLAH has 54 m from the waterline. The third mast is also a flue-gas stack, which is typical for modern tall ships. In this way, designing architects avoided side exhausts at the deck level, which are burdensome for the crew and detrimental to the overall aesthetics of the tall ship.
The EL MELLAH’s total sail area is 3,000 square metres. At wind of Beaufort scale 6, she can reach the speed of 17 knots. Manoeuvring, however, is easy thanks to the application of thrusters at the bow and aft. Setting sails can be onerous, since it can be done in a traditional way only, and, as it was in the past, Algerian cadets need to rely on the strength of their muscles.

The tall ship was designed by architect Zygmunt Choreń from Gdansk, also called the “father of sailing ships”. While developing the concept design for the ship, he followed plans for DAR MŁODZIEŻY. Both ships are of similar length and shape of the bow. However, too many alterations are made to the original design to call them sister vessels.

On 21st October 2017, at the shipyard wharf in Gdansk, she was commissioned to her Algerian owner. Several weeks later, she set out in her maiden cruise around Europe to call at La Coruna, Spain, on her route. The ship was manned with an Algerian crew, a core of which underwent a several-month training at the Maritime University in Gdynia and on board of DAR MŁODZIEŻY. On 2nd December 2017, EL MELLAH appeared in her homeport of Algiers. 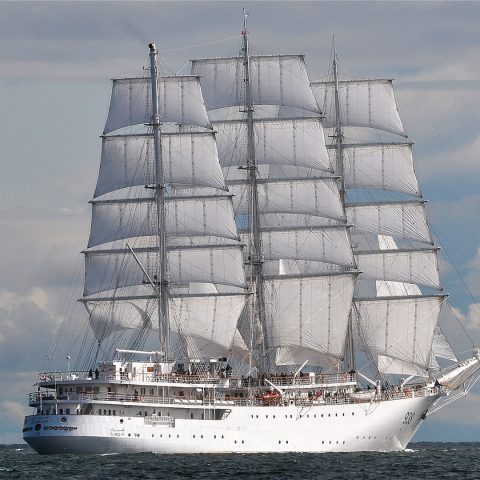