The wooden three-masted ship is an imposing replica of the 18th century merchant sailing vessel.

It was 12th September 1745. After a voyage which took more than two years, the three-masted ship returned to the port of Gotheborg. Her holds were filled with precious goods from China, including silk, porcelain and tea. The flagship of the Swedish East India Company (Svenska Ostindiska Companiet), which started her service in 1738, was concluding her third voyage to Asia. Crowds were gathered at the quayside, including longing wives, senior officials and hundreds of curious citizens. Suddenly something happened that nobody could have expected. Gotheborg suddenly changed her course and hit the Knipla Boro underwater rock, the location of which was well known. For certain, the experienced pilot, present on the bridge that day, knew about it too. Despite sunny weather and excellent navigation conditions, the disaster happened. Reasons of the accident have remained mystery until today. Water rapidly filled the ripped hull. The proud tall ship tilted to the side and started to sink in the deep waters of Kattegat. By that time, the ship had covered 35 thousand miles. She sank just 900 metres before safely reaching the port. Luckily, all crew members were rescued. Since logbooks were lost, some historians claimed that the sinking of the ship was not a coincidence. There were a number of theories explaining why Gotheborg sank, for instance, to avoid paying taxes on her precious cargo. The truth, however, was never to be revealed.

Contemporary Gotheborg is a replica of that unlucky vessel. Her construction started in 1995 and took almost a decade. It was much longer than in the case of her prototype which was built in one and a half years. Where was the difference? The aim was to use methods and materials possibly identical to those of the 18th century. It took long to find the right timber in terms of its quality and age. Finally, they found suitable oaks in Germany and Poland. It was also necessary to develop an execution design based on sketches and other documents, since original plans did not exist. Additionally, mastering of original shipbuilding skills took quite some time. Interestingly, even nails used during the process were hand-made. The ship is now equipped with the latest technology, including radar, radio, GPS, and the 1100 HP Volvo engine. The equipment is necessary to obtain contemporary safety certificates.

On 6th July 2003, the hull was launched and the Swedish royal family participated the ceremony. The ship commenced her service in 2005 and immediately set out for China. The maiden journey was symbolic as it followed the original trading route of her predecessor. On her way, Gotheborg visited 12 ports in 12 countries, including Spain, Brazil, South Africa and Indonesia. In each of them, a part of the crew exchanged with volunteers from countries visited. After two years, the ship returned to Sweden to be welcomed by crowds waiting in her homeport, including King Karol Gustav, and… Chin Hu Jintao, the President of China, who came to the country especially on this occasion. In 2013, the ship visited Poland for the first and so far the only time. She took part in the finals of the Tall Ships Races in Szczecin.

The construction cost of modern Gotheborg was approximately 40,000,000 US dollars. Forty percent of the amount was provided by the state budget, and the rest by sponsors, such as Stena Line, the Goteborg-based leading ferry operator. The length overall of the ship is 58 metres. The three masts and a bowsprit carry sails of the total area of approximately 2000 square metres. The crew consists of a maximum 80 people, of which one quarter are professional seafarers. The ship attracts attention with her richly decorated tall stern. The bow is also full of decorating details, including a figurehead of a yellow lion. An important part of the equipment comprises 10 cannons ready for gun salutes.

In 2016, due to financial constraints, the operator put the ship up for sale. The attempt to sell the ship failed. The ship has been staying in her homeport since 2017. In the following year, to economize on cost, the operator refused to certify the ship’s class. Moored at a quay on the Gota River (next to the museum four-masted Viking barque), the ship has become another maritime attraction of the city. It seems that better times are in for Gotheborg. Greencarrier, a logistics company, announced their intention to provide funding to restore and operate the ship. They even discuss… another voyage to China. 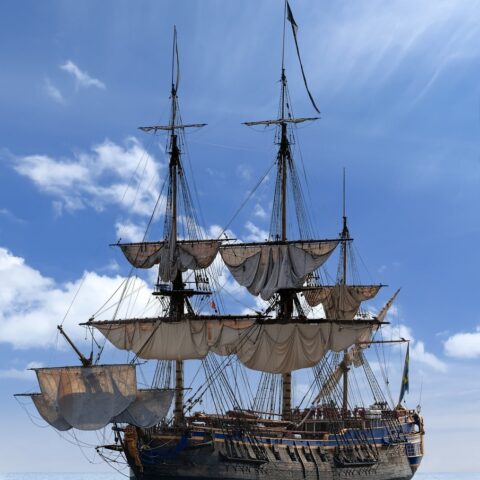