The idea to build Krasotka originated on board of Nadezhda, a two-masted schooner, which could make a story for a good action film. The ship was built as a fishing drifter named Sterna in Leiderdorp, the Netherlands, in 1912. It joined the fishing fleet that operated in Scheveningen. In 1927, she moved to Hamburg. While under the German flag, she had her name changed to Edelgard and became a cargo vessel. After nine years, she was bought by Count Felix von Luckner, the First World War veteran, famous of his exploits in command of raider Seeadler. During raids in 1916-1917, the ship sank 14 allied vessels with minimal loss of life on both sides. Von Luckner strictly followed his principles and before he sank any vessel he made sure that the entire crew was safe. He took not only war hostages on board but also dogs and cats. After the purchase the commercial raider, the count converted her into an elegant two-masted schooner which he named Seeteufel (after his nick name of Sea Devil). In 1937-1939, he circumnavigated the globe on board of the ship. It was the first voyage around the globe by the ship under the flag of the Third Reich. Officially, the voyage was non-political and Luckner presented himself as the “ambassador of peace”, but visits to ports on the route were used by Nazi services to solicit information and study the area. After the outbreak of WW II, the schooner stayed in Stettin (now Szczecin). In 1943, Hans Hass, an Austrian diver, bought the ship to use it for exploration. However, he did not manage to escape the rapidly approaching Red Army and the ship was captured by the USSR as war reparation. Under her new name, Nadezhda, she became a training vessel for the Leningrad-based Naval Academy, and then local yachting club. In 2005, the ship required an overhaul and was stuck in the port. Finally, the funding was provided by her new owner Aleksey Sidorov. In 2010, Nadezhda could sail again. This brings us back to Krasotka. A group of sailors from St. Petersburg, involved in the overhaul of the ship, were so fascinated with the schooner that they decided to make its copy. And that’s what they did. In 2014, in the Ameta Shipyard in St. Petersburg, they built a steel hull, and a year later the new tall ship started her service. Today, nearly identical schooners sail under the Russian flag. The only difference is that Nadezhda and Krasotka were born a century apart, respectively in 1912 and 2015.
The total sail area of her 6 sails is 450 square metres. The ship has two 25 m masts made of aluminium and magnesium alloy. The ship, operated by St. Petersburg-based Yacht Club, most often makes short cruises on the Baltic Sea taking up to 15 people on board. Krasotka also makes shorter, hours long cruises taking maximum 25 people. 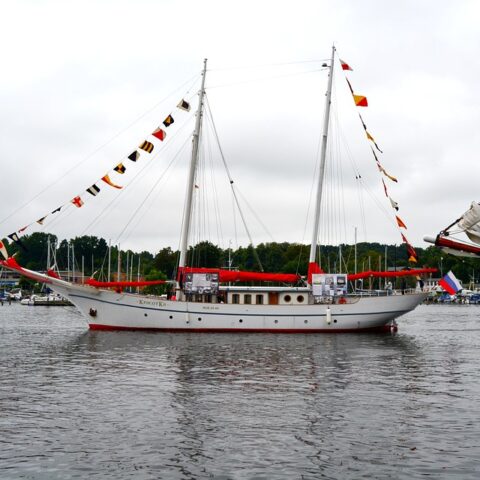 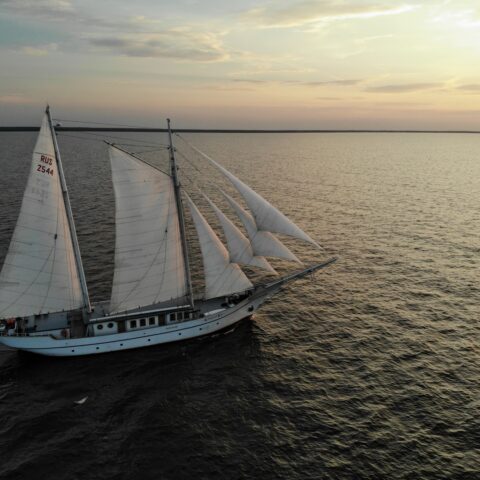 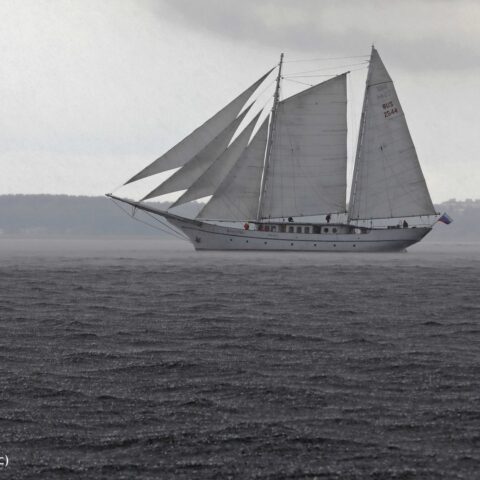 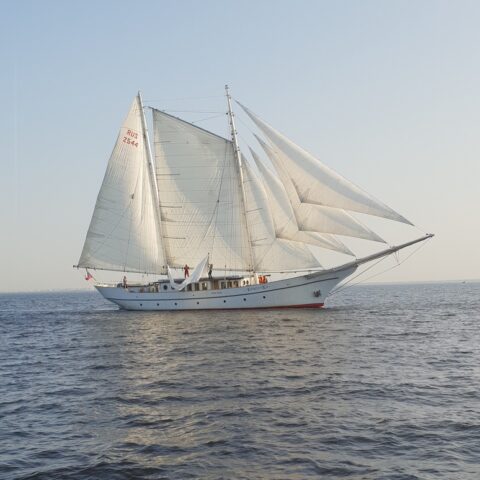