ARC Gloria is a three-masted barque built in the Spanish Celaya shipyard in Bilbao.

Consecutive commanders of the Colombian Navy had been dreaming of a sail training ship for years. The idea became more realistic in the early 1966, when it won support of the government in Bogotá. According to a popular anecdote, General Gabriel Rebéiz Pizarro, the then Defence Minister, agreed to designate budget funding for the construction of a sailing ship during a meeting in a restaurant, which he confirmed with his signature on a napkin. Vale por un Velero – consent to the sailing ship – he wrote when requested by the commander of the Navy. The latter preferred to have the consent in writing. The contract was made with the Spanish shipyard in October of the same year, this time on much more elegant paper.

On 2nd December 1967, the hull was launched and the god mother for the ship was the Minister’s widow Gloria Zawadzky de Rebéiz, apparently of Polish descent. Unfortunately, the general, who secured the building of the ship, died before the construction was completed. The name of the ship is the first name her god mother, not the first word of the Colombian national anthem, as many wrongly believe. The flag was officially hoisted on 7 September 1968. At that time, the ship was moored in a port canal on the Duero River in Bilbao. One month later, the barque set out for her maiden voyage to A Coruña, and then across the Atlantic to her homeport of Cartagena, which it she reached on 11 November. More than half a century has passed since then. During this time, Gloria circumnavigated the globe twice, in 1970 and 1997. Unfortunately, she has not visited Poland yet, although she has already been in the Baltic twice. In 1972, she visited Leningrad and Helsinki, while in 2019 Klaipeda and Karlskrona.

The prototype for the ship was a series of German training barques built at Blohm und Voss in Hamburg before the Second World War. The total length of the ship is 76 metres. Her three masts support 23 sails of a total surface area 1400 square metres. With good winds, the crew can set additional side sails on studs to increase the speed. The figurehead is impressive glittering female angel called Maria Salud in honour of the daughter of the sculptor Victor Gutiérrez Jiménez. Gloria has become an excellent promoter for the Spanish shipbuilding industry. Similar, although slightly larger, barques have been later ordered by other Latin America countries, such as Ecuador, Venezuela and Mexico.

The Colombian barque has been providing sail training for future naval officers who serve their duty for the 47 million nation. Cadets spend at least one year on board. They are affectionately referred to as “los gloriosos”. Gloria usually takes 165 people on board, of which 80 are cadets. Since 1999, cadets have also included women. During several legs of Velas Latinoamerica 2018, the crew consisted of women only! 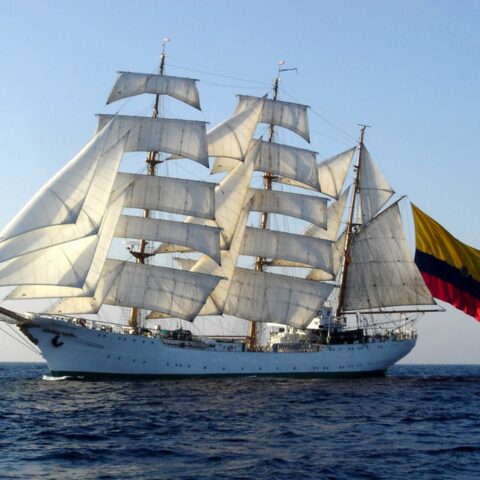 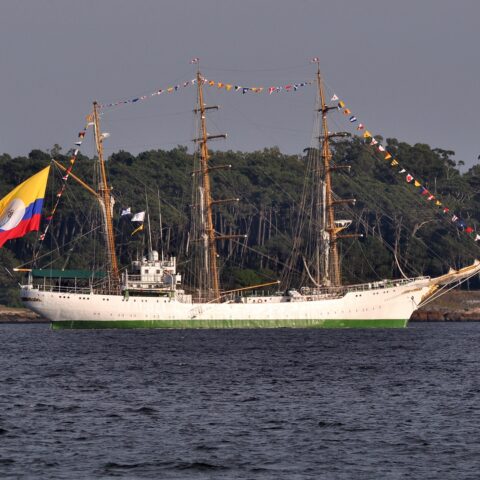