The building of the 58-metre ship with a steel hull started in the Hamburg-based H. C. Stülcken Sohn shipyard in 1952. The shipyard used a well proven design of Jadran, a Yugoslavian topsail schooner, which was built in the same dock in 1931-1933. In comparison to her elder brother from the south of Europe, she had her foremast rigging modified; Dewaruci was built as a barquentine. On 24th January 1953, the ship was launched and on 2nd October she started her service immediately upon her arrival to Indonesia.

Thousands of Indonesian officers had their training on board of Dewaruci. In her long history, the ship circumnavigated the globe twice setting out from her home port of Surabaya in 1964 and 2012. It even acted in an American movie “Anna and the King” with Jodie Foster. In August 2013, it almost sank during a severe storm on the Shark Bay near the western coast of Australia. The ship lost all her yards, bowsprit and the figurehead, and finally she was towed to the port of Fremantle. Once repaired, she returned home to provide further training to Indonesian cadets. The Navy, operating one of the largest fleets in Asia, decided to build a new tall ship. Spanish and Polish consortia competed for the contract. Finally, the contract went to the Construcciones Navales Paulino Freire shipyard in Vigo, Spain. On 18th September 2017, the 111-meter barque Bima Suci set out for her maiden voyage. Initially, the plan was to have a regular change of guard ceremony upon her arrival to the home country, after which Dewaruci would be converted into a museum.

This, however, has never happened and the barquentine is far from retiring. The ship stays in service providing sail training to younger cadets. Although the tall ship has been a frequent visitor to the Old Continent, we will never see her in Europe again. The crew in blue and white uniforms have always won hearts of millions of visitors and their orchestra has been applauded during The Tall Ships Races crew parades. At the moment, Dewaruci operates on internal waters of Indonesia only. Young people sailing on board of the tall ship undergo sail training and at the same time they learn about the diversity and abundance of nature of their insular country.

A traditional flower ceremony celebrated on board of Dewaruci is always performed while passing across the Sunda Strait between Western Java and Eastern Sumatra. It is performed to commemorate the late first captain of the ship. Died in 1966, August Friedrich Hermann Rosenow was a German officer who decided to serve his duty in Indonesia. It was him who convinced the Indonesian Navy to buy a tall ship. He also supervised the building of the ship in Hamburg and later became her first commander. In his last will he wanted his ashes to be spilled to the Sunda Strait.

KRI before her name correspond to the Polish designation of ORP, or a navy ship. It is an abbreviation of “Kapalperang Republik Indonesia”, or the Navy Ship of the Republic of Indonesia. Dewaruci, the patron of the tall ship, is a hero from “Mahabharata”, an Indian epic. He symbolizes truth, courage and enlightenment. 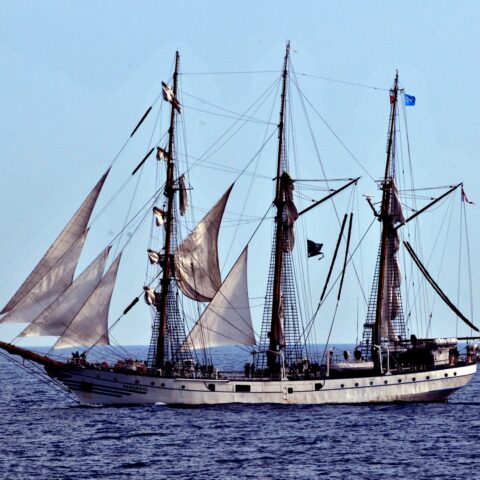