AMERIGO VESPUCCI was designed by Francesco Rotundi, built in the Castellammare di Stabia Shipyard near Naples, Italy, and launched on 22nd February 1931. The designer was a general lieutenant of the Italian Navy Engineering Corps. He was inspired by 18th c. 74-cannon navy ships of the line.

AMERIGO VESPUCCI was put into service on 26th May 1931, three years after her twin ship CRISTOFORO COLOMBO that was used by the Italian Navy until 1943. Today, few people remember that the imposing AMERIGO VESPUCCI had a twin, history of which had a tragic ending. After the war, CRISTOFORO COLOMBO was handed over to the Soviet Union as part of war reparations. In 1949, she was put into service under a new name of ДУНАЙ (DANUBE). She remained in service until 1959 and then kept “on a mooring rope”. Four years later, a fire broke out on the abandoned ship which led to her sad ending.

AMERIGO VESPUCCI was named after a famous sailor of Florence, considered the true discoverer of mainland America. A life-size figurehead of the patron has been placed under the bowsprit. The ship is 101 m in length and 7.3 m in draught. It is a three-masted full rigger with 26 sails of total surface area 2,635 m2, all of which are traditional canvas sails as it was a common practice centuries ago. Her homeport is La Spezia and she is operated by the Naval Academy of Livorno.

So far, AMERIGO VESPUCCI visited Poland twice. For the first time, it was shortly after she was put into service. In 1931, together with her twin brother CRISTOFORO COLOMBO, the ship called at the Free City of Gdańsk (Gdansk). She stayed at the roadstead of Gdynia, and the Italian delegation paid an official visit to the city. The ship made her second visit to Poland when it called at Gdynia in 1991.

According to a popular anecdote, during her Atlantic cruise in 1960s, AMERIGO VESPUCCI encountered the American aircraft carrier USS INDEPENDENCE. Americans were very curious of a tall ship under full sail, so when they approached her, their signaller asked in the Morse code:
– What ship are you?
– AMERIGO VESPUCCI – the training ship of the Italian Navy, was the answer.
Then the aircraft carrier responded:
– You are the most beautiful ship we have ever met at sea. 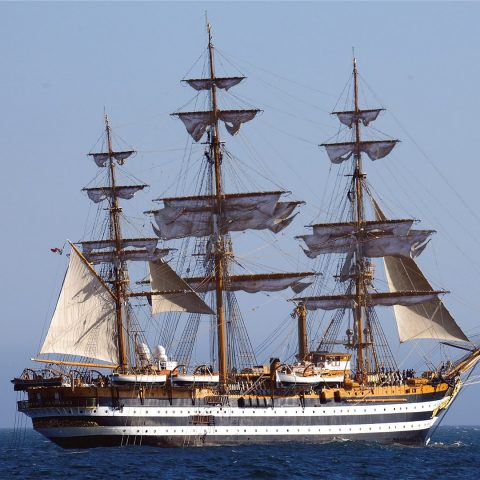 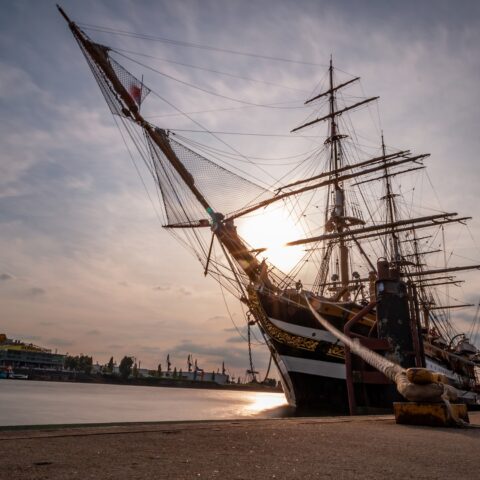