The three-masted barque is the first training ship of the Mexican Navy, but not the first tall ship of that name. The name of the last Aztec emperor was held by a Fletcher-class destroyer which Mexico bought from the US in 1970

In 1968, at a wharf of the Astilleros y Talleres de Celaya Shipyard in Bilbao, Spain, a commissioning ceremony was held for the Colombia’s barque GLORIA. The event initiated a boom for training tall ships in Latin America. A few years later, Ecuador placed an order for a similar but larger barque with the Spanish shipyard (put into service in 1976 as GUAYAS). It was followed by Venezuela (Simon Bolivar made her maiden cruise in 1979), and finally, the time came for Mexico. A prototype for all these barques was German GORCH FOCK. Her general arrangement was copied by the Madrid-based Senermar Engineering Design Company to design consecutive tall ships.

On 24th July 1981, in Bilbao, the keel was laid down for the Mexican barque. The hull was launched on 9th January 1982, and on 29th July the same year, the official commissioning ceremony was held. Finally, Mexican sailors’ dream came true. The 90.5 m long CUAUHTEMOC is the largest of the four sister barques built by the Astilleros y Talleres de Celaya shipyard. She is 8.5 m longer than her elder brother SIMON BOLIVAR! She also has more classical lines and low key superstructure than her predecessors.

The tall ship has been frequently referred to as the “knight of seas” (El Caballero de los Mares) and the ambassador of Mexico in the world. In Aztec, Cuauhtemoc means “the one who descends like an eagle”. The ship’s figurehead shows the last Aztec emperor in an eagle-like posture with a shield, truncheon and a war bonnet made of feathers of the resplendent quetzal, a bird which symbolizes freedom in the pre-Columbian mythology.

This three-masted ship has 23 sails of the total area in excess of 2.300 square metres. In good weather, she can sail at the speed of 18 knots. Mexican sailors are known for their grand parades on entrance to and departure from harbours. Like other Latin America tall ships, CUAUHTEMOC is famous of her illumination of masts, rigs and the hull. For decades, the illumination used hundreds of small bulbs. In 2020, the concept changed and they started to use modern lighting solution that was more uniform and enabled to change colours. 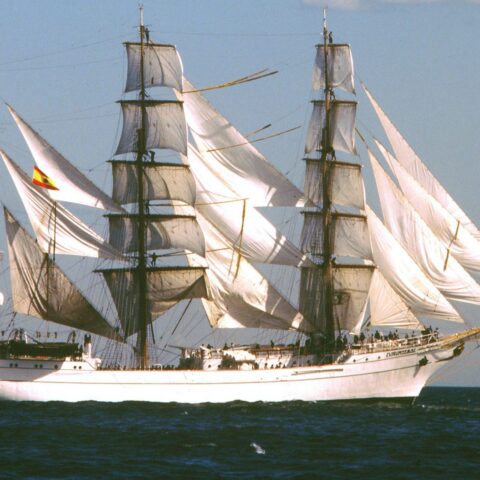 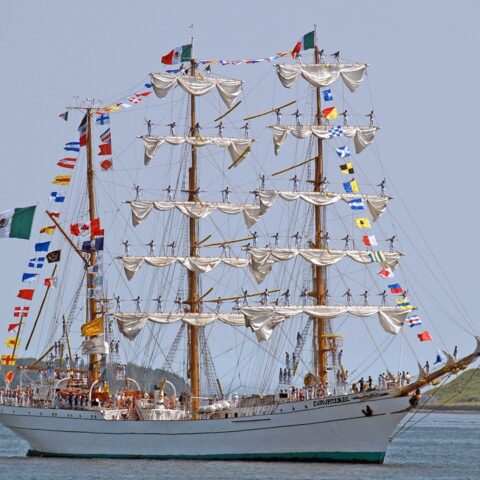