After years of catching cod in harsh weather conditions of Newfoundland, the schooner started her service for the Portuguese Navy. The schooner has been used by the local youth and students to learn and develop passion for sailing.

10th May 1937 was a very special day for Lisbon. From early in the morning, crowds moved towards the gates of the Companhia União Fabril shipyard, one of the largest in the country. Although it was Monday, no one worked at the shipyard. It was open to all curious men who came there in large numbers. It seemed that all citizens wanted to see the launching of two sister ships, namely the four-masted schooners of Creoula and Santa Maria Manuela. People were very eager to see the two ships which were built in exceptionally short time of only 62 days! The shipbuilding record made the front page headings in many newspapers. The ceremony attracted the President Oscar Carmona and, despite the civilian designation of the ships, a national anthem was played by the navy brass orchestra. It was a triumph of the Portuguese shipbuilding industry and a step forward in the development of Parceria Geral de Pescarias, a company which had been catching cod near Newfoundland and Greenland since 1891.

In the same year, the two ships joined the fleet and set out to catching grounds. Usually, Creoula started in April. Fishermen wives used to come to wave their husbands farewell and so did city and church officials. Then, the tall ship sailed from Lisbon to the other side of the Atlantic. Fishing continued near Newfoundland until the end of May. Later, after the ship replenished supplies in St. Johns, she moved to Greenland. At the end of September, when holds still had some space left, the ship caught fish near the coast of Labrador. Then, in the middle of October, she returned to Portugal with about 800 tons of salted cod and 60 tons of cod-liver oil. Creoula used to spend winter at Azinheira Velha where she moved for necessary repairs and maintenance.

Fishing was not an easy trade. Fisherman used one-person wooden rowing boats for fishing. When the fog accumulated suddenly, it was difficult to find their way to the base ship. For this reason, they often took dogs with them. Barking carried by ocean water helped fishermen to find their way back.

Creoula spent 37 seasons at catching grounds. It delivered over 23 thousand tons of fish. Fishing also continued during the Second World War, when packs of Nazi U-boats terrorised the Atlantic. Although the country declared neutrality, torpedoes destroyed several Portuguese ships. At that time, someone painted Creoula and other vessels’ hulls white and added PORTUGAL written in large letters together with the name of the vessel. This contributed to the new name of the “White Fleet”.

In 1970s, overfishing was a growing issue and consecutive countries started to limit the access to their catching grounds at their territorial waters. This same happened in areas frequented by Creoula. After a cruise in 1973, the ship was withdrawn from the service to be converted to a museum. During the renovation, it turned out that she was in such a good shape that it would be a pity to discontinue sailing. The Navy took over the ship and the colours ceremony took place on 20th March 1987. Contrary to the barque Sagres, she has been designated to provide cadet training. Thus, the Creoula’s deck remains open to Portuguese young people and students. During cruises, they can experience life at sea, learn how to be self-reliant and cooperate with others. At the same time, they can learn sailing from the experienced crew of 38 officers. Her emblem is a clear reference to her fishing past as it consists of two silver cods set against a blue background. Several red rowing boats are still kept on board of the ship.

Today, Creuola has steel masts. When she was still engaged in fishing, only columns were made of steel, whereas stengs, gaffs and booms were made of timber. Another difference is the material used for sails; in the past it was sailcloth, now it is Dacron. Interestingly, in 1959, after the reduction of rigging, Creuola had her bowsprit removed and the front mast was converted to a funnel. Today, the schooner’s rigging has been brought back to its initial arrangement at the beginning of her service.

Creoula is not the only schooner preserved from the Portuguese “White Fleet”. Santa Maria Manuela is still in operation, whereas their younger sister Argus, built in 1939 in the Netherlands, which became popular through a book by Alan Villiers, is going to be repaired and kept in a dry dock in Ílhavo as a museum artefact. 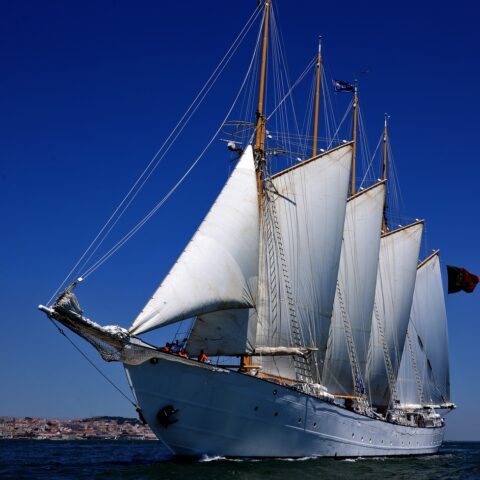 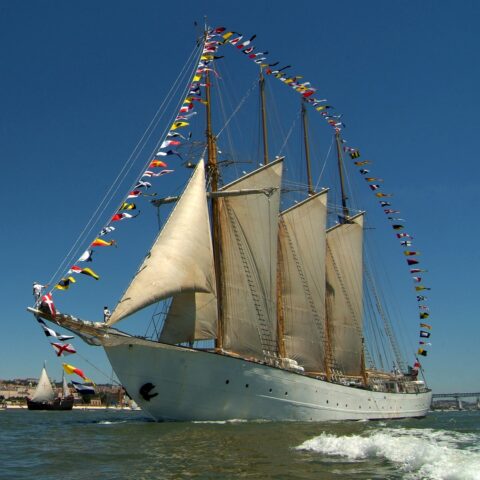 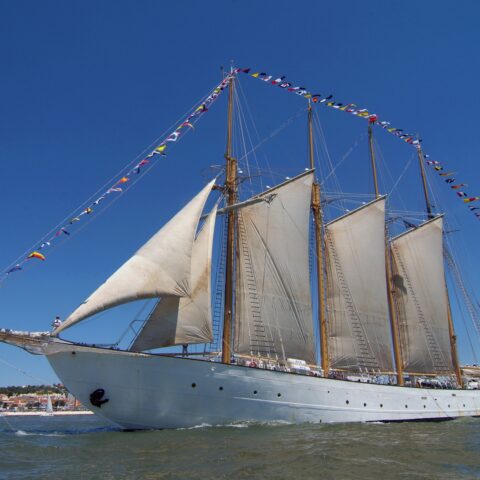