Cisne Branco is the flagship of the Brazilian Navy. Under the sails of the full rigger, future officers and seafarers from the coffee country undergo their training.

After the sale of the barque Guanabara to Portugal at the beginning of the 1960s – where the vessel has been operated as Sagres until today – the Brazilian Navy did not have sail training ship. This was a drawback not only regarding seafarer training, but it was also a question of prestige. Most Latin American countries having access to the sea had a tall ship which apart from sail training also acted as a sailing ambassador of the country. At the end of the 20th century, the Brazilians began to search for a vessel that would meet these criteria. They were in a hurry, since the 500th anniversary of Pedro Cabral’s expedition was approaching, an expedition during which he discovered Brazil. For this reason, they investigated the secondary market. One of their main choices was the Dutch barque Europe. When the Brazilian delegation arrived in the Netherlands, they met with representatives of the Damen shipyard. They told the Brazilians to have a look at the full rigger Amsterdam under construction and then offered to build a twin vessel (designed by famous Dykstra studio). The members of the delegation were impressed, but time was a priority. Then, the Dutch undertook to organize the process and have the new ship ready for the anniversary. They finally secured the contract for the ship.

After the contract was signed, the work started out full steam ahead. On 9 November 1998, the keel was laid and already on 4 august of the following year the launching and naming ceremony was held. The ready full rigger was handed over to Brazil on 4 February 2000. She officially entered her service after the flag was hoisted on 9 March, only 16 months after the commencement of the construction! Apart from Cisne Branco and previously mentioned Stad Amsterdam, two other twin sailing ships were built in the series, i.e. Shabab Oman II and Chinese Polang.

The ship has 3 masts and 31 sails of the total surface area 2195 square metres. Interestingly, for several years the Brazilians have been buying staysails from the Gdańsk-based Sail Service. Cisne Branco is one of few modern sailing ships, which, if necessary, has the opportunity to set 6 studding sails, which tea clippers were famous for. These are additional sails, which are based on special studs next to square rigging. The highest and the main mast of the full rigger has 46.4 metres. The ship has a white, steel hull, stylish wood cladding of the superstructure and the total length of 76 metres. Under sails, the ship is capable to develop the speed of up to 17 knots, and with motor up to 11 knots.

The homeport of the ship is Rio de Janeiro. The name Cisne Branco means a white swan. This is a reference to the title of a march, which is the anthem of the Brazilian Navy. The lyrics were written by Benjamin Constant, a national hero, whose name was given to the first Brazilian training ship. Built in 1892, the stately and well-armed steam and sail cruiser was named “white swan” because the French-sounding name was difficult to pronounce. The nickname was then turned into an official name, initially for the two yachts that the Brazilian Navy operated in 1970s and 1980s, and finally for the sail training full rigger.

The Cisne Branco crew consists of 82 people, of whom 31 are trainees. In 2010, she took part in Velas Sudamerica, a rally of Latin American training vessels. Then, for the first time, the ship rounded the Cape Horn under the sail. She also attended subsequent editions of the event, now known as Valas Latinoamica.
The stained glass of Cisne Branco under the sail can be found in the central place of the lounge which impresses with its taste and attention to detail. The stained glass picture was not a part of the original design. It was a surprise gift from the Dutch shipyard Damen. While taking over the finished vessel, the Brazilians were very surprised to see the piece of art they did not order. The stained glass picture is full of symbols. He shows Cisne Branco in the Guanabara Bay. In the background, one can see the statue of Christ and the Sugar Loaf, the most famous places in Brazil. The picture also includes the headquarters of the Brazilian Navy Academy. Above the stained glass picture, under a plastic dome, a small statue of Mary with infant Jesus has been placed. It is the Mother of Hope. A similar, though larger, sculpture decorated the on board chapel used by a Portuguese sailor Pedro Cabral during his voyage to discover Brazil. This statue is a gift from the Portuguese Government on the commencement of service by Cisne Branco. The gift was presented by the descendants of the famous explorer. The sculpture is supposed to bring happiness. The same role is also played by a coin placed under the foot of the main mast during construction. It is a custom dating back to antique times, and a reference to the myth of Charon, who ferried souls of the deceased to Hades. The Greeks treated a silver coin under the mast as a form of payment to ferry the crew to the other side of the river Styx, if the ship unexpectedly sank. Over time, the practice has become popular worldwide. For centuries, superstitious seafarers believed that they can secure luck for the newly built ships. The practice has proven to be effective in the case of the Brazilian full rigger and hopefully it continues for as long as possible. 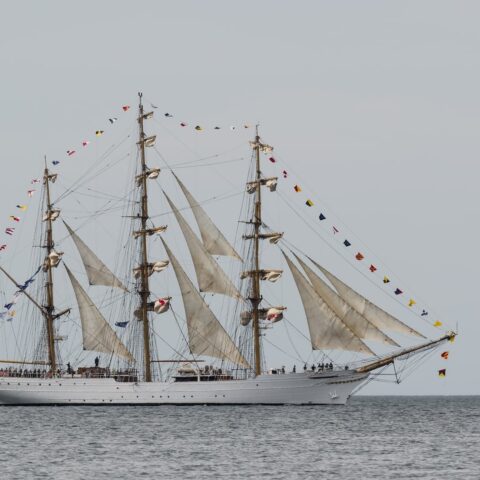 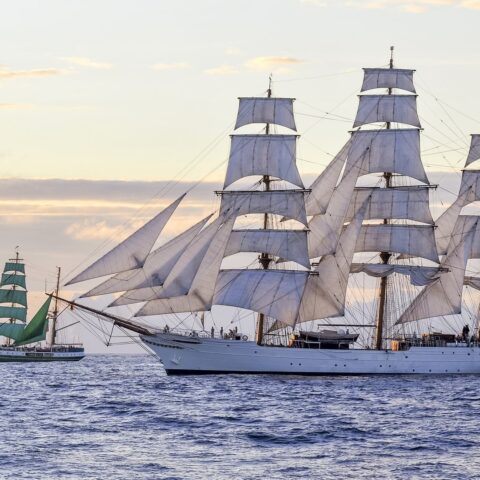 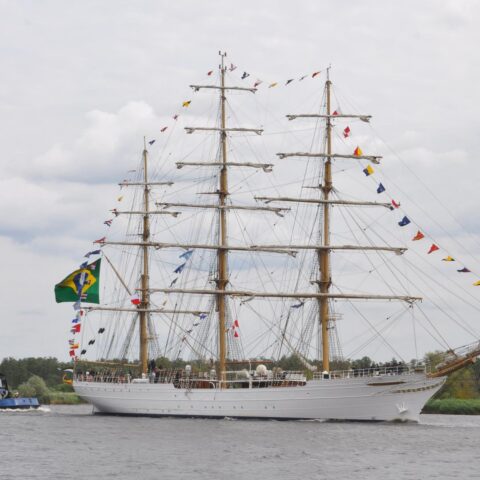 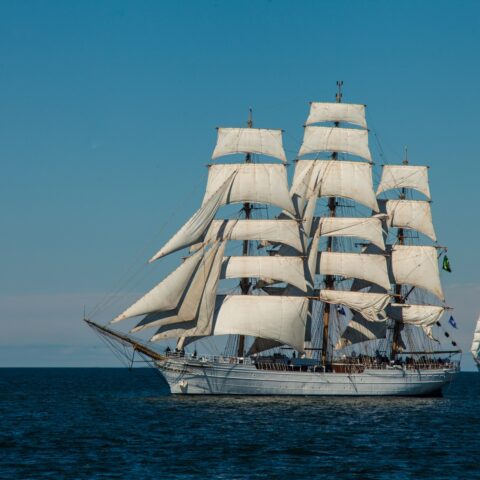 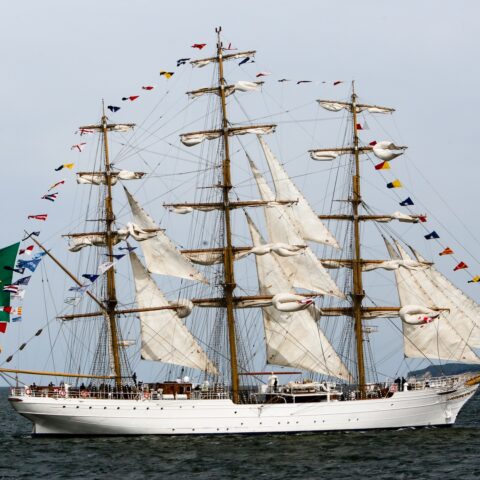