Norway has three large sailing school ships – the barque Statsraad Lehmkuhl and the square-riggers Sorlandet and Christian Radich. The latter is the youngest of the three.

The ship was built in the Framnaes Mekaniske Verksted Shipyard in Sandefjord. The hull was launched on 5th February 1937 and four months later, on 17 June, the ship began her service. From the very beginning, future seafarers were to be trained on board.

In 1938, Christian Radich attended a rally of sailing training ships organized by Swedish captain Arnold Schumburg. The event was held in Stockholm on 14-19 June and it has been considered the first ever rally of tall ships. The Swedish capital attracted ships from Denmark, Norway, Finland, Estonia and Germany. Poland was represented by Dar Pomorza. A decision was made to continue the event, and its organisation was taken over by the newly established North European Sail Training Association. Unfortunately, the plans were squandered by the Second World War. Shortly before the war, Christian Radich had sailed to New York to attend the world exhibition.

Once Norway was occupied in 1940, the ship was confiscated by Germans who used her as a base for the submarine crews. In 1945, the ship moored in Flensburg was damaged during by air raids and eventually sank in the port. After the war, the hull deprived of masts returned to the rightful owner. The shipyard in Sandefjord agreed to renovate the ship for 70,000 pounds sterling, a ship which it built less than a decade before. In 1947, Christian Radich once again started to train future seafarers for the Norwegian merchant fleet.

The 73 m square-rigged vessel is fast and manoeuvrable. Under the command of a courageous captain and with a competent crew, the ship becomes a true racing machine. She has repeatedly won in the Tall Ships Races. She won in 1956 in the historic first edition of the event on the Torbay – Lisbon route, as well as 50 years later during the anniversary of the event.

In 1958, a documentary film was recorded entitled “Windjammer” which won international recognition for the ship as a film star. The film showed lives of young people during a 239-day voyage on board of Christian Radich from Oslo via the Caribbean to the United States. Directed by Louis de Rochemont, the film used Cinemiracle, a modern widescreen cinema format. It was a great commercial success, not only in Norway. Suffice it to say, the film was presented in cinemas in Oslo for 29 weeks. Apparently, acting for the ship was like water to a fish or rather an ocean to a sailboat, because in the 1970s she appeared in the popular BBC series “the Onedin Line”.

The ship was sponsored by a timber entrepreneur, the owner of two sawmills. Simeon Christian Radich lived in 1822-1889 in Oslo (which then was called Kristiania). Although he did not sail himself, he was passionate about the sea. He loved listening to stories his cousin, a true sea dog, used to tell him. At the end of his life, he decided to donate 90 thousand crowns for the construction of a sail training vessel which would bear his name. His dream came true many years after his death, when a successor had to be provided for the aging Statsraad Erichsen built in the 19th century. 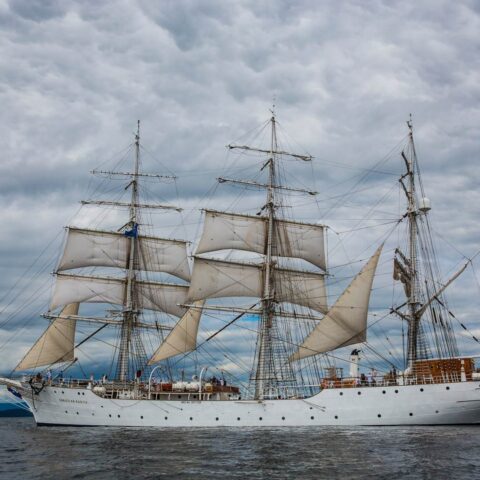