She has 3 masts and 8 sails of the total surface area 722 square metres. Two of them stand out due to graphic designs by the famous Uruguay painter Carlos Paeza Vilaro. The Mayan Sun, a symbol of Inti, an Inca solar goddess, also present on the Uruguay and Argentina flags, was the artist’s favourite pattern.

Capitan Miranda can take 95 people on board. Her homeport is Montevideo, the capital of the country. Her tall ship career started in 1978. Previously, the ship served as a hydrographic vessel surveying the Uruguay coast since 1930. It was built at the Matagorda Shipyard in Cadiz, Spain. Interestingly, she was built in less than half a year. In 1976, the motor ship retired from her service. She was supposed to be scrapped, but instead she was converted to a training schooner.

In 1987-88, she was the first Uruguay ship to circumnavigate the globe. The voyage took 355 days. During that time Capitan Miranda travelled 34,101 nautical miles. On her way, she visited Sydney, where she and other tall ships from all over the world (e.g. Dar Młodzieży, Poland) celebrated the 200th anniversary of Australia.

The bow is decorated with a stately figurehead in the shape of a sun god. It is the second sculpture under a bow piece in the history of the ship. The first one fell off in 2004 during a storm in the Mediterranean Sea. A replica was made by two Uruguay artists Javier Abdala and Andrés Santángelo.

The name commemorates Captain Francisco Prudencio Miranda, born in a Spanish family in Montevideo in 1869. He was an officer of the Uruguay Navy who turned out to be a distinguished geographer. The tall ship visited Poland twice. Both visits took place in Gdynia. The first one in June 1991 and the second between 20 and 24 August 2008. Each time, the schooner moored in the President’s basin. 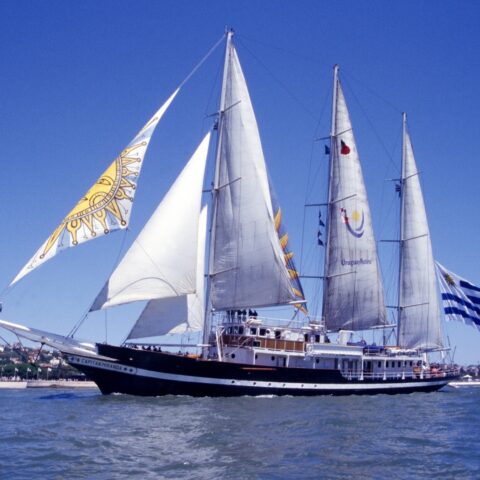 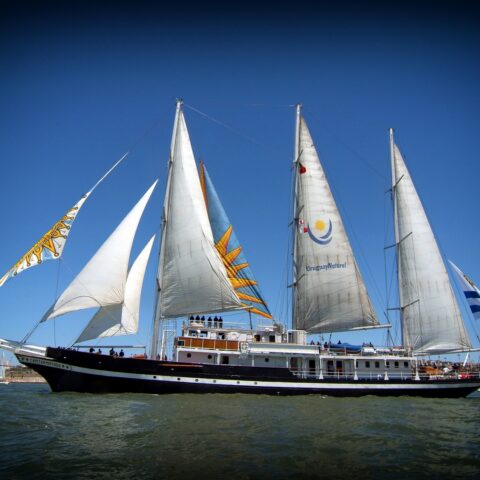