Built in the Grayson, Rollo & Clover Shipyard in Birkenhead, England, in 1868. At that time tall ships ruled at seas and oceans and transported the majority of cargo across the globe. The three-masted frigate was first named Chinsura. She had with a riveted steel hull, which was a novelty in the then shipbuilding industry. Her home port was Liverpool, from which she operated on routes to India and Australia until 1883. In 1893, the tall ship changed her operator to Fratellli Olivari, Italy, the name being changed to Lucco. She moved to her new home port of Genova. In 1898, the frigate lost all her masts during a storm on the Indian Ocean but finally reached her shelter port. Then, P. Landberg and Zoon, a Dutch company based in Batavia (today Jakarta), bought the ship for a bargain price. The new owner gave her another name, Nest, and she had her rigging restored. However, square-rigging was replaced with gaff-rigging at the mizzenmast. Thus, the ship became a barque.

At the turn of centuries, steamships became gradually more popular pushing tall ships out of commercial shipping. After World War I, hundreds of frigates and schooners perished in ports. Nest also shared the same fate, as she was decommissioned in 1919 and stayed on the Meuse River near Rotterdam. However, the ship had more luck.

In July 1920, Captain Gustaw Kański, a representative of the newly established State Marine School in Tczew, Poland, visited ports of western Europe with the goal of finding an inexpensive tall ship suitable for student sail training. In his opinion, Nest met all the criteria. Negotiating did not take long and the ship was bought for 247 thou. dollars (some sources provide lower figures). Thus, Poland acquired its first tall ship which was named Lwów (Lviv). It took another several thousand dollars to refit the vessel, which was done by a shipyard in Vlardingeen. The ship was fitted with two auxiliary engines and two independent propellers. Two holds at the tweendeck compartment were converted into sleeping quarters for 140 students who could sleep there in hammocks. Other holds continued to perform their storage function, so the ship could still generate some profit to cover a part of its maintenance cost. The Marine School was answerable to the Ministry of War, so Lwów was initially a navy vessel. For the first time, Lwów had her merchant flag hoisted in the early 1923.

On 23rd July 1921, after repair, the tall ship with a black hull painted in the Nelson Chequer called at her new home port of Gdańsk. The Lwów’s first commander was Tadeusz Ziółkowski, and officers included Mamert Stankiewicz and Konstanty Maciejewicz, both of them also master mariners. Therefore, in the same vein as in the French navy, the captain of a sail training vessel is referred to the commander. The custom has continued on board of Dar Pomorza and Dar Młodzieży, two other Polish training ships after Lwów.

On 4th September 1921, a colours ceremony was performed at the anchorage of Gdynia and a flag donated by female organisations from the City of Lviv, the ship’s patrons, was officially hoisted. Thus, the “cradle of navigators” started her sail training service. In 1922, the ship visited her birthplace of Birkenhead twice where she delivered timber. In the following season, the ship sailed to the Atlantic under the Polish flag. On 16th August 1923, she crossed the equator, which was celebrated with the line crossing ceremony. The destination was Brazil where Lwów delivered sickles to ports of Rio de Janeiro, Santos and Paranagua. The promotion the Polish industry in the Coffee Country was a failure, since no one was interested in buying the tools, and the crew suffered in the tropics due to harsh conditions on board of the old ship. However, the tall ship was enthusiastically welcomed by Poles living in Brazil. All in all, the pioneer cruise was successful. Although Lwów passed her ocean test, the Tczew-based school realised that they would have to look for a more modern vessel pretty soon. The 16380 NM cruise which took 171 days was a milestone in the history of Polish shipping. The barque had to spend winter in Cherbourg, France, since the Baltic Sea was jammed with ice.

In 1924, Captain Mamert Stankiewicz took over the command to be replaced by Konstanty Maciejewicz two years later. The ship made consecutive training voyages, with the longest ones to the Mediterranean Sea in 1925 and 1928. During their stay in Italy, the delegation of Lwów’s crew visited the Pope Pius XI, and while in Bulgaria, they laid a wreath at the mausoleum of King Władysław of Varna.

On 13th July 1930, in Gdynia, the flag was brought down on board of Lwów. It was a symbolic changing of the guard with Dar Pomorza, a new training ship. The Navy bought the barque to hulk submarine crews. Due to the shortage of funding, it was not possible to preserve the “cradle of navigators” and convert her into a museum. In 1938, the ship was scrapped. 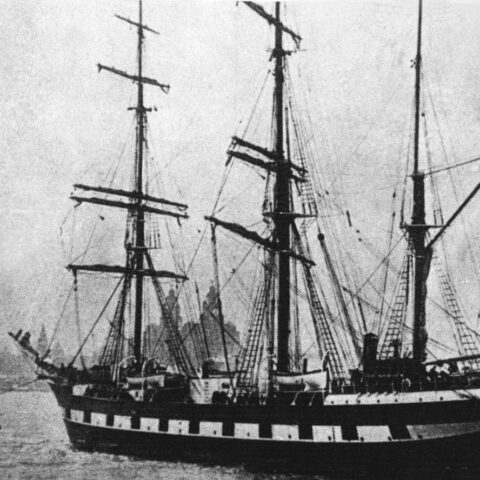