Dar Pomorza is the most famous of Polish tall ships.

It was built at the internationally acclaimed Blohm und Voss shipyard in Hamburg, Germany. The shipyard laid the keel on 9 March 1909 and launched the ship already on 12 October of the same year. In the following year, on 6 April, the ship was put into service under the name of Prinzess Eitel Friedrich, in honour of duchess Sophia Charlotte of Oldenburg, a daughter-in-law of the German Emperor Wilhelm II. Hamburg became the first homeport for the tall ship which served as a training vessel for the German merchant fleet. At that time, the white of her hull was broken with an ochre stripe on the sides of her bow and stern. It was a typical pattern used by the Association of Training Tall Ships (Deutscher Schulschoff Verein), the first operator.

After the First World War, France took over the ship as part of the war reparation. Additionally, her name was changed to Colbert. The French did not have a plan for the ship and she stayed on a rope and decayed in Saint Nazaire for a number of years. There, in 1929, she was spotted by Poles who were looking for the successor to the worn out training vessel “Lviv”. The tall ship’s looks were not imposing, and she was described by the press “a pile of scrap”. However, an in-depth inspection revealed that the ship was in a good condition. The contract was signed shortly after. For a bargain price of 7.000 pounds sterling, largely from donations offered by inhabitants of the Pomerania Region, Poland purchased the tall ship to be operated by the Higher Maritime School which had just been moved from Tczew to Gdynia.

In December 1929, while moving across the Biscay Bay to the Danish shipyard in Nakskov, two tow ropes broke. Since the ship did not have an engine, she drifted quickly towards the dangerous shore of Brittany. The minimal crew finally managed to anchor the ship just 30 meters from the rocks of Les Etocs! In this position, the ship survived lashes of violent hurricane-like winds. After her renovation in Denmark, the square-rigger sailed to Gdynia where on 13th July 1930 the white and red national flag was solemnly hoisted. Initially, the name chosen for the ship was Pomorze. The word “Dar”, which means a gift, was added to recognize the generosity of Pomeranian citizens.

In 1934-35, under the command of Konstanty Maciejewicz, she was the first Polish ship to circumnavigate the globe. The pioneering cruise lasted almost a year (16 September 1934 – 3 September 1935). At that time, the square-rigged ship had covered the distance of nearly 39 thousand nautical miles. On 1st March 1937, during her winter cruise, Dar Pomorza rounded the Cape Horn. The white and red flag had never been seen before in these stormy waters. One year later, the ship participated in a meeting held at the initiative of the new Stockholm-based North European Sail Training Association. It is now considered to be the first historical tall ships rally. Dar Pomorza returned to the Swedish capital shortly and stayed there longer than planned. She was interned and spent the Second World War in Stockholm. After her return to Poland, she continued her service as a training ship for seafarers and officers.

In 1972, the “white square-rigged ship” raced for the first time in the Tall Ships Races. On the Solent-Skaw leg, under the command of Kazimierz Jurkiewicz, the ship won a brilliant victory over German Gorch Fock and American barque Eagle. Two years later, the victory attracted the Tall Ships Races to Gdynia, Poland. In 1976, the ship went to New York in honour of the 200th anniversary of the US Independence Declaration. The last trip in the active service was a trip to Kotka, Finland, in autumn 1981.

Today, she is one of the biggest tourist attractions of the Gdynia harbour and the Pomerania Province. After she retired from her regular service, she became the property of the Central Maritime Museum (now the National Maritime Museum). Since 1983, she has been accessible for visitors. Apart from periodical maintenance, the last time she left the Port Gdynia was on 5 July 2009. At that time, the tall ship, assisted by tug boats, was an honorary stand during the parade at the final of the Tall Ships Races. 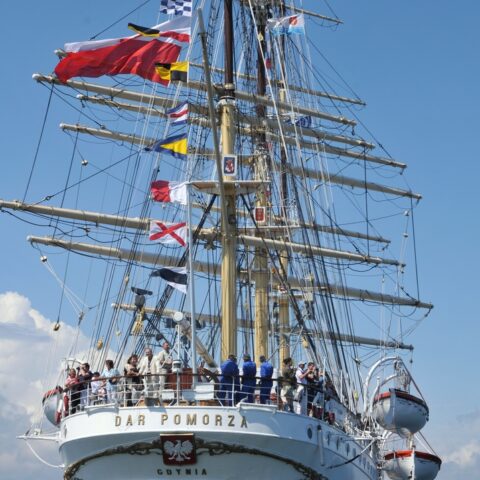 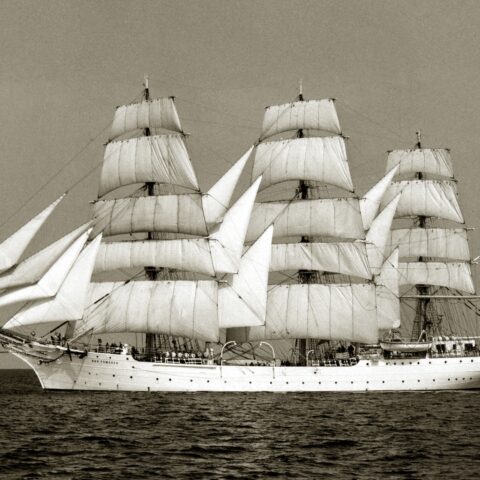 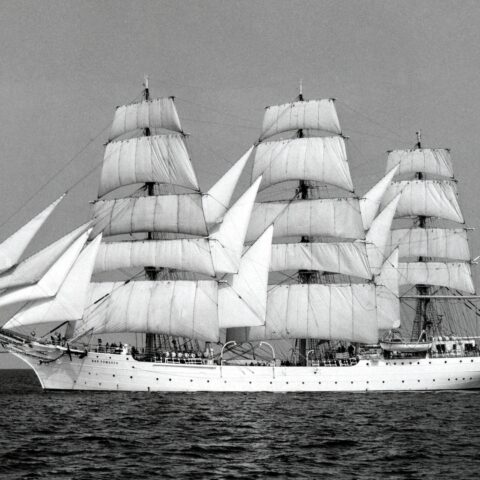