After Colombian GLORIA, GUAYAS is the second sailing ship built for the South American owner by the Celaya shipyard in Bilbao, Spain. The Ecuadorian barque is an extension of her sister ship design. She is longer from her elder sibling by 2.4 m. She has a much better planned flue-gas system, and the white of her hull is cut by a black horizontal stripe.

These, however, are not the only differences. An observer’s eye can be attracted to the GUAYAS silhouette with a mahogany bridge overlooking the superstructure. Interestingly, the bridge was initially open. After some time, however, it turned out that manoeuvring in pouring rain and gusty winds was better controlled from a roofed structure. They added a roofing and a series of oval portlights along the entire front side of the bridge.

For a long time, Ecuador sailors dreamed about having their own training ship. They fought for it by listing advantages of sail training, including a representative role of the ship. The process accelerated when Ecuador learned that their northern neighbour Columbia bought a tall ship. On 1st March 1974, during an event at the Ecuadorian Navy Academy, Guillermo Rodriguez Lara, the country’s President, signed a consent to order a tall ship. The order was placed with a Spanish shipyard to secure an already proven design. After the contract was signed in May 1974, shipbuilders in Bilbao commenced their work. On 1st June 1976, the keel was laid and almost 5 months later, on 22nd October, the hull was launched. She was put into service on 22nd July 1977. Her first crew embarked the ship in Spain after their in-depth training on board of the Spanish barque GALATEA. Why not on board of JUAN SEBASTIAN de ELCANO? Because GALATEA’s parameters and rigging were more similar to GUAYAS’. On 1st October 1977, at 10:00 sharp, after a two-month maiden voyage across the Atlantic and the Panama Canal, the new Ecuadorian sailing ship made her triumphant entry to the homeport of Guayaquil.

The name of the ship is a reference to the main river in Ecuador and the leader of the Huancavilca native tribe which once lived in the area of Guayaquil. It was also the name given to the first steamship built in South America in 1841. The ship is still in the national emblem of Ecuador. Another reference to national symbols can be found in the figurehead of a flying condor.

During her long service, the ship circumnavigated South America several times going past Cape Horn. In 2015-2016, she made her first and the only so far circumnavigation of the globe through the Panama Canal, Suez Canal and around Cape Leeuwin. In 2007, her crew won the Friendship Trophy, the top award during the Mediterranean Tall Ships Races voted by captains in secret ballot. 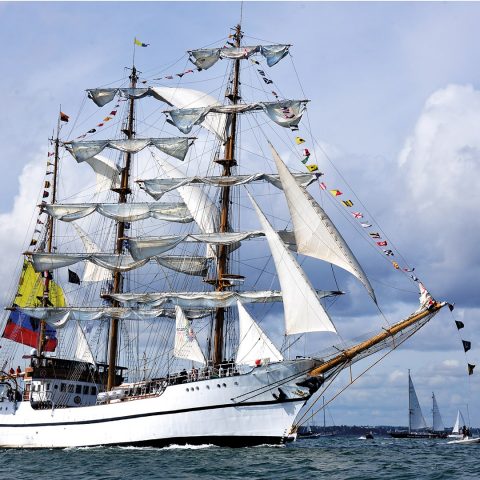 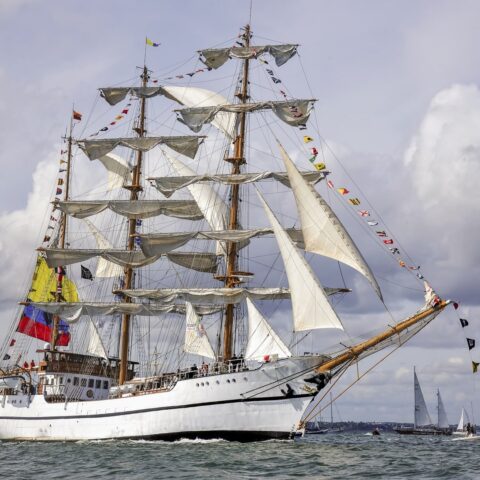 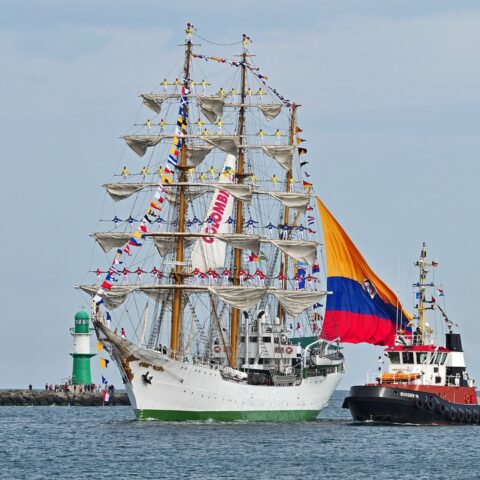 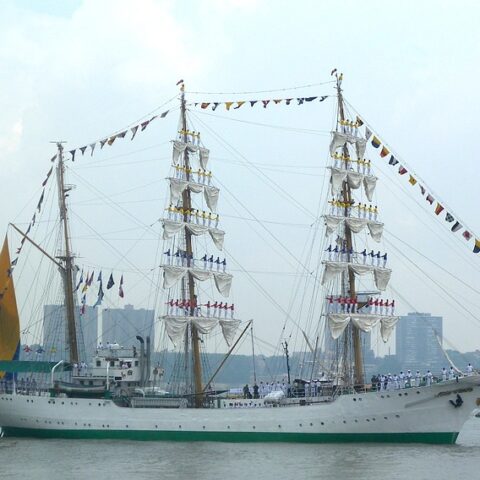