Adolf Hitler once walked along her deck. Spurs at führer’s military boots scratched the wooden deck, but no one dared to draw his attention to the fact. At that time, the three-masted tall ship was called HORST WESSEL. Today, it is EAGLE, known as the America’s Tall Ship – used as a training cutter for the US Coast Guard officers.

EAGLE is a tall ship of a complex history. Launched in 1936 in the Hamburg-based Blohm und Voss Shipyard, as the second – after GORCH FOCK – tall ship of the series designated for the rapidly growing Third Reich navy. The patron of the tall ship was Horst Wessel, a commissioned officer made to martyr by the Goebbels propaganda. Horst was a young member of the Nazi assault detachment SA who died after being shot by a communist in 1930. Before he died, he was known for being a music enthusiast and a keen organizer of brutal assaults on labour activists. The song Horst-Wessel-Lied, he wrote, became an unofficial anthem of the Third Reich. The barque was used to provide early training for young sailors who then joined crews of U-boats, battleships and destroyers.

After Germany signed the act of surrender, the time had come to distribute spoils of war. To make it equitable, representatives of winning states drew lots. At first, HORST WESSEL went to the USSR, but an American officer, who desperately wanted to return home on board of a tall ship, convinced his Soviet counterpart to swap. After a refit in Bremerhaven, the ship was commissioned to the United States on 15th May 1946. On that day, HORST WESSEL died, and EAGLE was born. With her new name and a mixed American and German crew, the barque sailed to her new home in New London, Connecticut. The city was also the headquarters of the US Coast Guard Academy, a coast guard officers breeding ground. EAGLE became the Academy’s flag ship and a training vessel. This started a new chapter in the ship’s history, a chapter which has continued until today.

When in 1972 EAGLE competed with DAR POMORZA in The Tall Ships’ Races, her hull was all white. Later, during the opening a New York Parade on the 200th anniversary of US independence on 4th July 1976, she showed the world her new colours with traverse red and blue stripes and an inscription of US COAST GUARD. The Tall Ships’ Races 1976 was an occasion for all five sister ships to meet at the same location: EAGLE, Romanian MIRCEA, Russian TOVARISCH (now museum ship GORCH FOCK), Portuguese SAGRES and GORCH FOCK II.

During her multiple years of service under the flag of the United States, EAGLE has never visited a Polish harbour. Will this change in 2021? 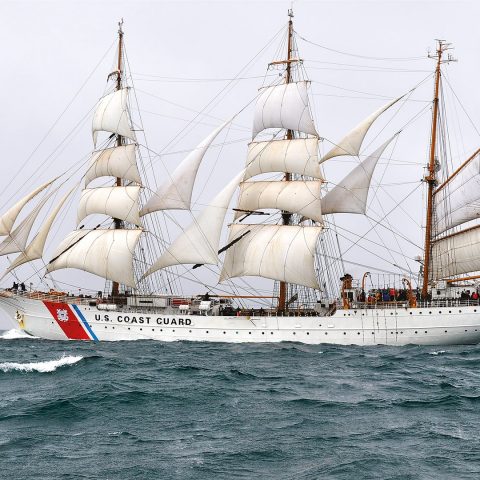 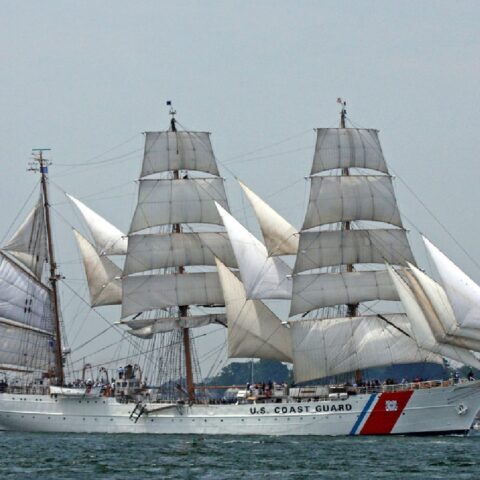