She was not meant to be a sailing ship. It was commissioned by the Polish SAR service as an auxiliary cutter.

After WW II, the Polish coast, especially the bays of Gdańsk and Puck, were full of wrecked ships. Some sank during a battle, others, like the huge battleship Gneisenau, were sunken by retreating Germans to block the entry to the port of Gdynia. The removal of wrecks took years and required much effort and money. The job would not be possible without divers. For them, the auxiliary cutter was built in the Fishing Repair Base in Puck in 1952. The ship was named Pucka Bryza. She had a wooden hull of 18.44 metre in length and a characteristic silhouette with a tall midship deckhouse. Bryza, as finally was her abbreviated name when she started the service, could convey 6 people and develop a speed of 9 knots. Her home port was Gdynia, the headquarters of the then owner – the Polish Search and Rescue.

In time, when wrecks ceased to be an urgent issue, Bryza became a rescue cutter, and she continued her service until 1982. When she was withdrawn from work she was sold for a symbolic amount to National Defence League (NDL). The new owner did not have a clear idea how the ship could be used. It stayed idle and perished at the Wisłoujście Fortress in Gdańsk. Since the ship was not guarded properly, she attracted thieves and drunkards who sometimes used the ship as toilet. Then, the ship was found by Waldemar Heisler, an attorney at law from Gdańsk, whose father in law was involved in building of the ship. The NDL eagerly sold the ship and got rid of a problem. The conversion of the vessel into a sailing ship started and took 16 years. It took so long since the owner wanted to renovate the ship himself in his time off. He was close to abandon his plans. The ship sank on her way from Gdańsk to Gdynia. Fortunately, they picked the ship up and completed her renovation soon after.

Finally, in 2000, Waldemar Heisler proudly showed his new sailing ship to the world. He decided to keep her former name, Bryza, expanded with the initial of his surname. He developed a seaworthy ketch of 23.8 metres in length. The stout midship deckhouse was replaced with a smaller one at the aft. The two-masted vessel had her sails of the total area 180 square metres. Her home port was Gdańsk, from which she set out to the Baltic Sea. She has been frequently participating in sailing events when she may take on board as many as 28 people, or 14 on longer cruises. 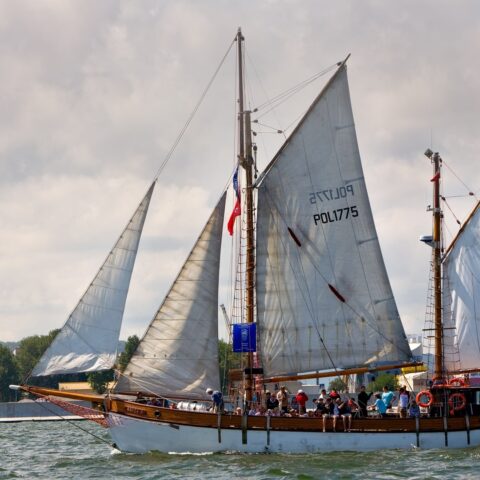