In 1932, Belle Poule was built in Fécamp, Normandy, France, to serve as a sail training vessel.

Since they had not operated any sail training vessel since 1914, the Navy decided to restore their sail training tradition. Leaving modernity aside, they concluded that traditional seafarer skills were irreplaceable. In 1931, a decision was made to build two twin sailing ships, which were given typical French names of Etoile (or Star) and Belle Poule (Beautiful Hen). These were supposed to be rather small ships of 37.5 meters in length. In neighbouring countries, including Germany, Denmark, Norway and Poland, much larger three-masted sailing vessels were used for training (i.e. square-riggers and barques]. However, the French took their own path, slightly against the then trends. They chose a proven design following a two-masted wooden schooners operated by Breton fishermen from Paimpol. These were light, fast and seaworthy vessels used for catching cod in difficult waters around Iceland.

The contract was awarded to an experienced military shipyard in Fécamp. The twin ships joined the service in 1932 – Belle Poule in July, and her younger sister in November. Since then, they have been used to provide training for students from L’Ecole Naval du Lanvéoc-Poulmic, the French Navy Academy. The ships are based in Brest, and apart from a permanent 16-member crew, they can take 25 cadets on board.

During the Second World War, Etoile and Belle Poule were part of the Free French Forces, that is to say, the part of the army that did not accept the capitulation and declared the service of the puppet government of Vichy headed by General Petain. To commemorate the fact, both schooners still enjoy the right to display the flag of Free France with the Cross of Lorraine.

Today, Belle Poule is the fourth vessel in the history of the French navy to bear such a name. The first one was built in Bordeaux in 1765-67. On 17th June 1778, the ship won a victory over English frigate HMS Arethusa. They say that once Queen Mary Antonina heard about it she requested to have a miniature copy of the vessel placed in her wavy hair, and the hairstyle was then called by fashion historians “à la belle poule”. The most famous “beautiful hen” was the 19th century frigate, no board of which a coffin with the body of Napoleon Bonaparte was brought from the St Helena Island to France in 1840. 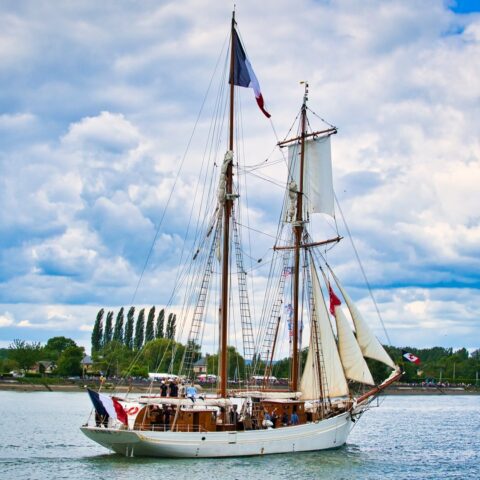