In 1947, her hull was made of oak in the fishing shipyard of Darłowo, Poland. The shipyard was the first to start operating in the town which inflicted severe damage during the war. The shipyard was already up and working in August 1945. After its completion, the hull was towed to Gdynia where it was fitted. The ship started her service with the designation of KD-153. Letter “K” meant cutter, “D” shipyard (Darłowo), and 153 designated her length overall in decimetres.

She was initially operated by local fishermen for several years. The cutter had an engine that enabled the maximum speed of 9 knots, whereas sails set on two masts were used as auxiliary propulsion. In 1950s, she was used by the Border Military Service to patrol the area. After a decade, the cutter became a fishing vessel again and operated from ports of Łeba, Władysławowo, Gdańsk and Jastarnia.

In 1980s, ship owners changed several times. Finally, in 1997, Wojciech Dubois, a passionate sailor from Kołobrzeg, bought the ship. After refitting, she became a leisure vessel with a new name of Makler and delivered anglers to fishing grounds and participated in old timer rallies on the Baltic Sea. Since 2014, the ship’s operator is Gdańsk-based POLSail. The new owner decided to repaint the black hall white and give the ship a new name. They have provided a regular maintenance and in 2019 they installed a figurehead under the bowsprit. The total sail area is 95 sq. metres. In 2016, Paweł Adamowicz, the then Mayor of Gdańsk, awarded the ship with a Marine Certificate and a privilege to promote the city among sailors across the globe. 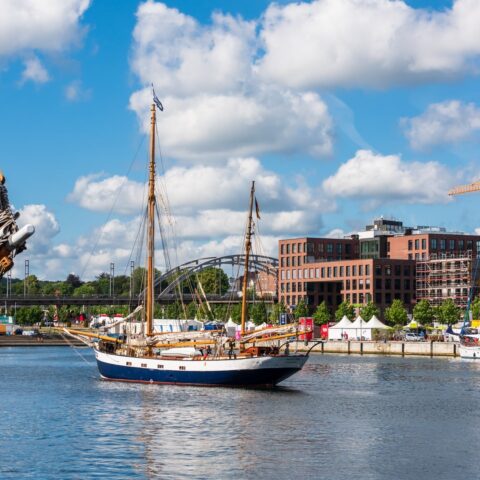